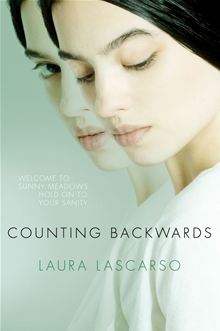 Published by Atheneum Books for Young Readers on August 14, 2012

Taylor Truwell is a sixteen-year-old girl from Florida with a troubled past, a neglectful mother, a seemingly callous father, and an urge to flee. When Taylor is caught with a stolen car, her violent reaction lands her in court for resisting arrest. Her father convinces the judge of an alternative to punishment: treatment in a juvenile psychiatric correctional facility. And so Taylor arrives at Sunny Meadows.

Sunny Meadows is anything but the easy way out, and Taylor has to fight hard just to hold on to her sanity as she battles her parents, an intrusive therapist, and a group of particularly nasty fellow patients. But even as Taylor clings to her stubborn former self, she gradually relents to new friendships—and to unexpected romance. Sunny Meadows goes against everything Taylor stands for. But could it be the place that saves her?

This was one that I borrowed from the library before Christmas, but kept putting off reading because there were other books I wanted to read first. Well, I finally got around to reading this, and it turned out to be a very quick read – I finished it in two sittings.

I liked this book. I think I put off reading it for so long because I worried it would be dark and depressing, but it actually wasn’t.

The story picks up as Taylor is brought to Sunny Meadows by her father, and she argues with him until he leaves. Clearly their relationship needs some work. However, she quickly makes friends with Margo. Margo’s funny and I really liked her, but she had some enemies who promptly informed Taylor that if she was Margo’s friend, she was their enemy too. Thankfully, though, this didn’t really lead to much – I wasn’t eager to read a book about girls beating each other up or anything – but Taylor’s relationship with these girls was interesting to watch progress throughout the book.

Through Margo, Taylor meets A.J., who apparently doesn’t talk to anyone anymore. Taylor feels something for him though, and it was interesting to get to know A.J. and his story. In fact, getting to know a little about even some of the minor characters that become part of Taylor’s life, like Charlotte, McKenzie, and her classmates helped make the world feel big and real.

Other than memories or flashbacks, the whole story takes place at Sunny Meadows, and Taylor’s progression through her treatment program. Initially, she is rebellious and hellbent on getting out of there one way or another. Over time, though, she begins to see a purpose in the way things work and chooses to participate in her treatment. This notion of control over her own life, through decision-making, seemed to be a really important part of her growth.

Even when Taylor was being angry and acting out, I still liked her, because I understood why she was behaving that way. Sometimes when a main character is misbehaving on purpose, and out of anger, I get really frustrated and annoyed, but with Taylor, I sympathized. I don’t have any complaints about the characters in this book – I liked A.J. and appreciated that the romance between he and Taylor was slow going and took its time, and that their relationship was rocky at times. I also thought Margo was fabulous, and definitely my favourite character. Even some of the people I didn’t like much at first grew on me by the end of the story. The exception to that might be Margo’s mother. I didn’t like her, and I didn’t dislike her – I guess I was sad for her.

Much of Taylor’s issues to work through involved her relationships with her parents, who are separated. She sees her father as cold and distant, and she has been living with her alcoholic mother. Although Taylor loves her mother, she also feels abandoned by her. It seemed that Taylor had avoided dealing with her feelings about her mother for such a long time, and I thought the scenes where she finally began to address these feelings were really well-written.

In fact, I thought the whole book was well-written. The story flowed, and every time I told myself I’d put the book down after the current chapter, I wound up reading the next one because I just didn’t want to stop. Taylor’s growth seemed real to me and when she began to change, it seemed genuine and authentic, not just a ‘quick fix’ for the sake of the plot.

I don’t think I’ve read much contemporary YA fiction lately, so this was a nice change of pace and a really good book that I definitely recommend.