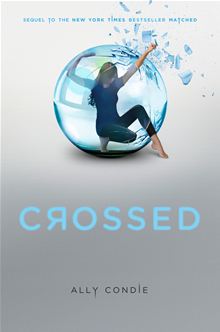 Cassia and Ky both narrate their quests crossing the ochre mountainous Carving to reach their love. She seeks the resistance, The Rising led by the Pilot, but does he? New teen friends red-haired Indie, fishing Vic, and chatty Eli, join them. Nothing is as expected on the edge of Society, where crosses and double crosses make the path more twisted than ever.

This is the second book in this series, following Matched, which I read last year and enjoyed. Be warned that there may be spoilers for Matched. Here is the summary from Goodreads:

Oh boy, I really struggled to get into this book, and that’s probably because it’s been a long time since I read Matched and really needed to refresh my memory on what happened at the end of that book! I always do that with any series I start to read, and I’m trying to get better at working my way through a series.

However, once I figured that out, I somewhat enjoyed this book. Although I found it a bit slow-moving, I liked that Ky and Cassia were out of the Society’s clutches (for the time being, at least), trying to find each other and survive on their own.

I did feel that this book suffered from ‘book two’ syndrome, because there was some plot advancement, but I felt like the author was holding back and clearly setting up for a larger conflict in the final book. That’s all well and good when it’s done well, but this book felt like a place-holder, like it existed just to bridge the gap between a first and third book.

I liked the development of Cassia and Ky’s romance (which surprised me, given how much I usually complain about romance!), and the way they struggled with wanting to take a different path – would they make choices based on their beliefs, or based on wanting to stay together? I also liked the characters that were introduced, especially Indie. I hope I get to read more about her in the next book, and she certainly makes the love triangle (square?) more interesting.

Speaking of that love triangle…since Xander was absent for the majority of this book, it wasn’t actually that much of an issue. However, towards the end, Cassia begins to think about him some more, and compare and contrast the two boys. Sigh. I just don’t care that much about the love triangle in this book – I don’t care who she ends up with! I understand what it means to have had Xander ‘chosen’ for her by the Society, and that having Ky’s face appear instead threw a wrench into everything and led Cassia down the path she’s on now, but I think they’re both good guys, they both love her, and I can see why she would be attracted to each of them. So for once, I don’t have a preference regarding the love interest, but I’m not really looking forward to reading the next book if it’s all about Cassia struggling to choose between Ky and Xander.

The story was narrated alternately by Ky and by Cassia, but I really couldn’t feel any difference in either of their narrative voices. Honestly, sometimes I had to go back to the start of the chapter and look at the heading, to double check which one was narrating. It just felt like the same voice throughout the book.

I never really got much sense of danger from this book. Once the story picked up and they were making their way to the Carving, I never worried for Ky and Cassia’s safety. They were in danger from nature/the elements, which was definitely interesting, but I never really felt that the Society posed much of a threat to them in this book, and so I didn’t feel any real sense of urgency.

Oh gosh, I can’t forget to mention that Xander’s big secret that was hinted at throughout the book really did surprise me! I actually didn’t see it coming, and that’s one plot aspect I’m looking forward to reading about more in the next book.

So yes, although I really didn’t love this book and was really frustrated with the fact that Cassia and Ky’s narrative voices seemed identical to me, and that not much seemed to happen (I really think it could have been like 100 pages shorter), I will be reading the next and final book in the series, Reached.