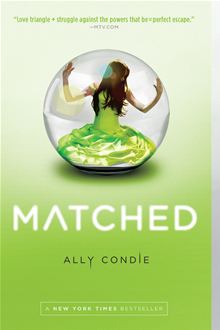 Published by Dutton Books for Young Readers on November 30, 2010

In the Society, officials decide. Who you love. Where you work. When you die.

Cassia has always trusted their choices. It’s hardly any price to pay for a long life, the perfect job, the ideal mate. So when her best friend appears on the Matching screen, Cassia knows with complete certainty that he is the one…until she sees another face flash for an instant before the screen fades to black. Now Cassia is faced with impossible choices: between Xander and Ky, between the only life she’s known and a path no one else has ever dared follow—between perfection and passion.

I enjoyed this book. Reading about Cassia’s life, where everything is regulated by the Society, from when and what she eats to what she does in her leisure time, was really interesting. I always like to read about dystopian societies. People now live to 80 and do not die of disease or as victims of crime; their nutrition is optimal to keep them all in excellent health; and they no longer have to choose or make decisions about anything, from who and when to marry to what to eat to what job they’ll have – the Society does all of the deciding for them. And the people don’t mind, because they believe that their lives are far better than pre-Society humans, whose lives were often cut short by disease and crime, and who were overwhelmed by choices and information.

In Cassia’s society, all knowledge is controlled by the Society. For example, the Society selected 100 poems that were important to keep, and destroyed the rest. They did the same thing with movies, music, and books – there are 100 of each that the Society chose to keep and the rest were destroyed, lost forever. People only know what the Society wants them to know, but believe that it’s all for the best and that because they live longer and healthier, they are better off.

The story begins with Cassia preparing for her Matching Ceremony, where she will learn who she has been matched with for marriage. People can choose not to be matched and be Singles – I would have liked to hear a bit more about this – but all those who choose to be matched are entered in the Society’s Matching Pool, where their data will be analyzed and they will be paired up with someone. Cassia is excited to dress up and find out who her match is – it could be someone in another province, a total stranger, and she’s excited at the prospect of someone, something unknown to her. However, at the ceremony, she ends up matched with Xander, her neighbour and best friend since childhood.

At the ceremony, each girl receives a micro card that contains information about her match, so that she can learn about him. Cassia, of course, knows everything about Xander already, but one day decides to put the card in the computer (called Port) at home – it is part of the matching process, after all, and just because she already knows the boy she’s been matched with doesn’t mean she can’t take part in the process. At first, she is shown Xander’s face – but for a second the screen changes and another boy’s face appears.

I liked a lot about this book. I liked reading about the depiction of Cassia’s society and the hints that things were not as perfect in other provinces as she believes they are in hers. I also liked the characters, and thought Cassia’s family was very well-written. She, her younger brother, and her parents love each other, and as Cassia begins to see things differently, not only does she want to protect her family, but she begins to see how her parents protect her and realizes that they may know more than they let on about the way things work. I particularly liked the scenes early on involving Cassia’s grandfather. Cassia’s progression throughout the novel was interesting and believable, as well.

As much as I liked this book, though, I thought the romance aspect was a bit overdone. I don’t want to give away any spoilers and ruin the plot, but I thought the writing in these scenes was somewhat melodramatic and over the top. It was still a good book, but I think  that I’ve read other young adult stories that have done the romance aspect better, without coming off as overwrought as this one, and so this book suffers by comparison in that respect (I’m thinking of Divergent, The Hunger Games trilogy, Shiver).

Overall, though, I liked this book and I’m looking forward to reading Crossed, the next in the series.