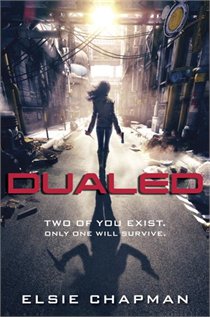 Two of you exist. Only one will survive.

The city of Kersh is a safe haven, but the price of safety is high. Everyone has a genetic Alternate—a twin raised by another family—and citizens must prove their worth by eliminating their Alts before their twentieth birthday. Survival means advanced schooling, a good job, marriage—life.

Fifteen-year-old West Grayer has trained as a fighter, preparing for the day when her assignment arrives and she will have one month to hunt down and kill her Alt. But then a tragic misstep shakes West’s confidence. Stricken with grief and guilt, she’s no longer certain that she’s the best version of herself, the version worthy of a future. If she is to have any chance of winning, she must stop running not only from her Alt, but also from love . . . though both have the power to destroy her.

I love the concept of this book, with everyone having a duplicate, Alt, of themselves and only one can survive. Every adult living in Kersh has ‘completed’, meaning killed his/her Alt. It’s a city full of killers, but all done in the name of survival and safety. Actives (those who have received their assignment to find and kill an Alt) have 30 days to complete, or else both Actives will be destroyed.

As much as I liked the idea and was super excited to read this book, the world building was pretty lacking and I had to tell myself not to think about it too much or else it would all fall apart and I wouldn’t be able to enjoy the story. The explanation involves a vaccine for the common cold, leading to infertility and the city then  sealed itself off from the rest of the country, and decided that two of each baby will be born, but will have to kill each other. Actives can receive an assignment anytime between the ages of 10 and 20.

I tried to stop myself from asking questions like, Why not just make one of each child and train your whole population? Why create genetic duplicates just to have them wage a personal war across the entire city? Why, if the ‘worthy’ Alt survives, do they then end up stuck in sedentary jobs? Why not just build an army or something with mandatory service/training for the population, if what you ultimately want is a citizenry  best suited to defend the city in the face of a possible attack sometime in the future?

The more I thought about the world building and reasoning behind the book’s premise, the more I tried not to think that way, in order to just enjoy the story, which is ultimately what got me through. I love books set in completely different worlds, and as others like B. Rose say, no matter how out-there the premise seems, I can buy it as long as it feels somehow believable. I really struggled with that in this book.

However, once I turned my brain off a bit, I really liked a lot of things about this book. For example, the story line of West becoming what’s known as a striker (someone who is hired to kill someone’s Alt, which is definitely frowned upon by the government) in order to train for facing off against her own Alt. It also seemed to me that West was eventually accepting contracts as a striker to avoid dealing with her own life: everyone in her family has died; she is pushing away her only friend and potential love interest, Chord, in an effort to keep him safe; and she is afraid to face her Alt. The striker aspect presented an interesting subculture to the story and I liked it (although I was also yelling at West in my head to stop accepting contracts and find her Alt, seeing as how you’re only given 30 days to complete).

West was not always the easiest character to like, because she kept doing the opposite of what I wanted her to do! I wanted her to just speak honestly with Chord, who was a very nice guy, and I also wanted her to track down her Alt and just get the job done! However, West grew on me by the end of the book, especially after she encountered Dess, a young active, and helped him out even though she didn’t have to. I don’t think the characters were ever developed enough for me to feel really attached to any of them, but I was definitely rooting for West to get it together and be the survivor.

I loved that there was so much action in the book, and that the romance was not over the top. Nothing much really happened between Chord and West, physically, but I think it was important for West to be able to acknowledge Chord’s feelings, and her own, and see that she may have had something else to fight for and live for.

One last issue I had with this book was that I didn’t get to know anything about West’s Alt. I loved the scene where West went to her house, because I was hoping I would learn something about her, but I didn’t really. Perhaps this was intentional so that, like West, the reader only sees Alt as an opponent, but I thought more would have been done with the idea of a genetic duplicate of West being out there in the same city, basically forced against their will to kill each other, and that perhaps they might even have become allies or something and teamed up, or at least had some sort of heart to heart conversation before attacking each other. View Spoiler » « Hide Spoiler I also thought the final showdown between the two was somewhat anticlimactic. I never doubted that West would kill her Alt and be the one to survive, but it felt to me that the scene where they finally battle to the death was over way too fast. [/spoiler]

I also loved that there was no cliffhanger at the end of this book, despite the fact that there will be a sequel. I don’t really know where a sequel will take this story, but if the world building will be expanded upon, I’m looking forward to reading it. Although the world building and character development were a bit lacking for me, the action is good, and if you’re a fan of dystopian YA, I recommend that you give this book a chance.