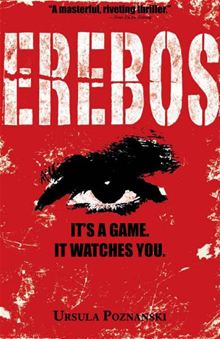 Published by Annick Press on February 1, 2012

An intelligent computer game with a disturbing agenda.

When 16-year-old Nick receives a package containing the mysterious computer game Erebos, he wonders if it will explain the behavior of his classmates, who have been secretive lately. Players of the game must obey strict rules: always play alone, never talk about the game, and never tell anyone your nickname.

Curious, Nick joins the game and quickly becomes addicted. But Erebos knows a lot about the players and begins to manipulate their lives. When it sends Nick on a deadly assignment, he refuses and is banished from the game.

Now unable to play, Nick turns to a friend for help in finding out who controls the game. The two set off on a dangerous mission in which the border between reality and the virtual world begins to blur. This utterly convincing and suspenseful thriller originated in Germany, where it has become a runaway bestseller.

This is a book I added to my TBR around the time I read This Is Not A Game .

This is the English translation of a German book, but the story is set in England. Nick has noticed kids at school passing some sort of disc to each other, but when he tries to talk to them about it, they become very secretive. As more kids – including his friend Colin – seem to be in on this mystery, Nick becomes more desperate to find out what’s going on.

Finally, a girl offers him the disc, which turns out to be a computer game, but on the condition that he never discuss the game with anyone – even with other players – and that he always play it alone. Nick quickly becomes immersed in the game, playing Erebos constantly. It seems to be a multiplayer RPG. However, as Nick spends more time in the game, he notices that the messenger – the mysterious character who doles out rewards to players and provides them with tasks to earn more – seems to know a lot about Nick’s life outside the game. As the tasks assigned by the messenger become stranger, and dangerous, Nick realizes that he is caught up in something that is more than just a game.

This book was good. I didn’t love it, but I thought it was a fun read. The plot moved quickly, and as a video game (and especially RPG) lover, I enjoyed reading about Nick playing Erebos. I knew the book was headed in the direction of ‘evil  computer game controls children for its own ends’, but wasn’t sure who/how/why it was happening, and really wanted to get to the reveal.

I was surprised by the heart-tugging, emotional ending, in a good way. I didn’t feel especially connected to the characters (Nick, the protagonist; his friends Jamie and Colin; and Emily, his crush), so I was surprised that I was so satisfied with the end of this book.

One complaint I had, and I don’t know if it was the translation or the way the book was originally written, was that, at times, the writing seemed awkward or stilted.

Overall, though, this was a fun read, and if you like science fiction and/or video game related stories, I recommend this book.