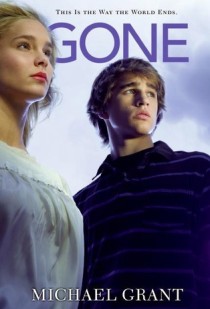 This is not a new series, and it’s been on my radar for a while, but it can be a bit daunting to jump into a long-running series.

I knew I wanted to read it, but I also knew that if I liked the first book, I’d need to read the others (I think there are six books in the series).  At a time when I’m trying to tackle the books I already own but haven’t read yet, I wasn’t sure that starting a new series was such a good idea, but I went ahead and did it anyway.

In the blink of an eye. Everyone disappears. GONE.

Except for the young. Teens. Middle schoolers. Toddlers. But not one single adult. No teachers, no cops, no doctors, no parents. Just as suddenly, there are no phones, no internet, no television. No way to get help. And no way to figure out what’s happened.

It’s a terrifying new world. Sides are being chosen, a fight is shaping up. Townies against rich kids. Bullies against the weak. Powerful against powerless. And time is running out: On your birthday, you disappear just like everyone else…

First of all, I would like to say that I kind of can’t stand the cover for this book. It just seems generic and kind of cheesy. But don’t let it put you off! The book inside is sooo good!

First of all, a warning: there is some violence in this book and it’s pretty chilling. It reminded me of Battle Royale and Quarantine #1: The Loners, with the kid-on-kid violence committed. But trust me, it makes sense within the story. After all, the world has fallen into chaos with the disappearance of everyone 15 years old and up. Tempers flare, people compete for control, and food is getting scarce.

Part of what I liked about this book was that there was a large cast of characters who seemed only loosely connected, if at all, at the beginning of the book but who are brought together by the end. For example, I loved seeing Lana’s story converge with that of Sam and the others in town.

The premise intrigued me, and at times it was pretty scary. There’s a moment where someone wonders briefly about the pets and babies in homes that are suddenly adult free, and he allowed himself just a moment to think about their fate before putting it out of his mind.

The mystery of where everyone else has gone had me guessing, and the bits and pieces of an explanation that I got were pretty satisfying. Of course, since this is the first in a series, there is still a lot that remains unknown, but I like what I’ve learned so far. It’s really different from anything else I’ve read.

I liked the main characters, Sam, Astrid, and Edilio, and of course I didn’t like the villains. It was interesting to see, though, how some characters changed throughout the story so that some who I perceived as main villains at the start were something else by the end. And Sam has such pressure placed on him to lead that I felt for him. It’s such a heavy burden for anyone, let alone a 14 year old, to be placed unexpectedly in the position he’s in, knowing people are looking to him for guidance, answers, some sort of plan…and on the other end is Caine, who wants the power and control, and who sees what’s happened as a situation that he can take advantage of and exploit.

The writing in this book is not the best – it felt a little bland and clumsy at times – but the story more than makes up for it. I couldn’t wait to see how it would end, and I wasn’t able to predict anything about this book, which I loved.

This was a pretty exciting book. It took me a while to get through it, since I started it and then put it aside to finish some other books, but I really liked it. I’m definitely going to read the sequel.