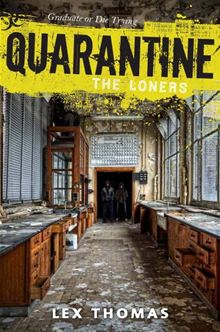 The Loners By Lex Thomas

It was just another ordinary day at McKinley High—until a massive explosion devastated the school. When loner David Thorpe tried to help his English teacher to safety, the teacher convulsed and died right in front of him. And that was just the beginning.

A year later, McKinley has descended into chaos. All the students are infected with a virus that makes them deadly to adults. The school is under military quarantine. The teachers are gone. Violent gangs have formed based on high school social cliques. Without a gang, you’re as good as dead. And David has no gang. It’s just him and his little brother, Will, against the whole school.

I picked this up off my holds list from the library on Saturday and meant to wait until I’d read some other books I had already borrowed before beginning this one, but I couldn’t help myself – I started reading it right away.

I liked this book. It was really intense and action-packed, and things moved quickly. I loved the way the story got going right away: after a brief introduction to David and his younger brother Will, including learning that their mother died, David walks Will into the school. It’s Will’s first day and he’s understandably nervous. David runs into a teacher and almost immediately an explosion rocks the school, and the teacher dies in front of David.

Then the book jumps forward a year – yes, all of the students are quarantined in their high school for an entire year. I think we can all agree that that is not an ideal situation! By now, they’ve learned that they carry a virus that is lethal to adults, and as a side effect, the kids’ hair has turned white. Anyone over 18 who comes too close dies just like the teacher did in front of David, on that first day of school.

The students have, for the most part, formed gangs for protection. There are the Pretty Ones, Varsity, Nerds, Skaters…I can’t remember all of them, but there were quite a few, and each gang identifies itself by its territory and hair colour (the members use whatever they can to dye their hair the appropriate colour).

They have been quarantined, and the military drops pallets of food and supplies on a regular basis. These drops are dangerous, because the gangs are all gathered, waiting to grab what they can, and they are out for blood if anyone gets in their way. That’s why the drops are very dangerous for the Scraps – the kids who aren’t members of any gang, and are on their own. This is the situation David and Will find themselves in when the reader joins back up with them. This will change over time, but I don’t want to give any of that away!

I really liked the plot, the whole idea of quarantine in their high school for such a long period of time, with virtually no contact with the outside world. Other than the food drops, which are done by helicopter, the only other time the kids see anyone from the outside is at ‘graduation’ – when a student begins experiencing symptoms like nosebleeds and headaches, it’s a sign that they’re becoming affected by the virus in the other kids. There is a gate set up near the entrance to the school, and a thumb scan will reveal if the student is able to leave the school. This happens shortly after kids turn 18.

I can’t talk about this book without mentioning the violence. This book is really intense and graphic and kind of horrifying at times. If that isn’t your thing, you may want to avoid this book. I, for one, appreciated that the author (technically, authors – Lex Thomas is actually two authors, writing together) was not afraid to go there.  If an author is going to put the characters in dire, life and death situations, then s/he can’t be afraid to, or hold back from, showing the consequences. At times, the violence reminded me of Battle Royale, but somehow, even though it was no less graphic, this book felt less over the top and more gritty.

Of course, I’m not without complaints. My first complaint is that David’s younger brother, Will, really got on my nerves. I think I can understand why he acted the way he did, but he was constantly antagonizing David, who I felt did everything he could to keep both of them safe, and in light of the dangers of their situation, he was so reckless at times. Being younger, though, I think Will will grow as a character and mature over time (because of course, as you can tell from the title, this is the first in a series).

My second complaint is about the sort-of love triangle that takes place for much of the book. Lucy, the girl involved, clearly has feelings for David, but she also has a history with Will, who definitely has feelings for her. I am not always a fan of love triangles, and I thought Lucy knew how Will felt about her but still flirted and sort of led him on even though she didn’t feel the same. I didn’t like that. It felt mean and manipulative, and for the most part, I liked Lucy and thought she was a really nice person.

Overall, though, I really enjoyed this book! It’s a few hundred pages and I read it quickly, in a couple of days. If you like action, survival stories, and don’t mind the violence, I definitely recommend this book. I’m looking forward to the sequel!