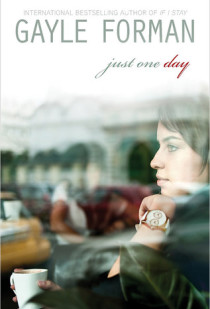 I’ve been hearing such good things about this book since it came out, and after I read Gayle Forman’s If I Stay and Where She Went, I knew I wanted to get my hands on this!

When sheltered American good girl Allyson “LuLu” Healey first meets laid-back Dutch actor Willem De Ruiter at an underground performance of Twelfth Night in England, there’s an undeniable spark. After just one day together, that spark bursts into a flame, or so it seems to Allyson, until the following morning, when she wakes up after a whirlwind day in Paris to discover that Willem has left. Over the next year, Allyson embarks on a journey to come to terms with the narrow confines of her life, and through Shakespeare, travel, and a quest for her almost-true-love, to break free of those confines.

I absolutely loved this book. I started it on a Saturday night and only put it down because I already had plans to go out. I got up early Sunday morning to finish it though and couldn’t put it down until I read the final page.

The story starts with Allyson and her best friend on a tour of Europe, post-high school graduation. They see a Shakespeare-in-the-park style play and Allyson and one of the actors, Willem, definitely have a connection! When he suggests he show Allyson around Paris on her final day of the trip, she surprises herself by saying yes. After they spend an amazing day together, with Allyson taking on a more assertive, free-spirited persona, she wakes up the next morning to find Willem gone. Feeling foolish, she goes back to her life in America, and prepares for her first year of university.

The second part of this story focuses on Allyson’s first year at school, adjusting to life away from home and the academic pressures of school. While she was a good student in high school, she is struggling with her pre-med course-load and her grades are dropping. The thing is, even though it was just one day, that day with Willem in Paris changed her. It opened her eyes to who she could be, what life could be like, but she feels so embarrassed or ashamed following her night with Willem that she tries to push all of that down.

Eventually, she realizes that she needs to go back to Paris, to see if she can find Willem and perhaps get some answers about what happened that night. I loved the rest of the book because after making that decision, Allyson began to open up to people, make friends, and take control of her own life and do what she wanted, not what others wanted or expected her to do.

Allyson is not the kind of girl who hops on a train with a stranger. She was very sheltered, an only child, and was not impulsive or reckless. I know there were moments in the story where other readers have said they were annoyed with Allyson, for letting people walk all over her or for not standing up for herself, but honestly, she reminded me so much of myself, especially at that age. I was shy and didn’t make friends easily, and liked routine over the unplanned or unknown. I could totally identify with Allyson, and reading about her journey, I just felt so connected to her. Even when her actions frustrated me, I completely understood where she was coming from.

I totally fell for Willem! He was cute, adventurous, charming…I totally believed that he and Allyson had a real connection. And who wouldn’t love to spend a day in Paris with a cute guy? Honestly, on a pure fantasy level, the first part of this book is just plain fun.

I’ve never really travelled, and this book has completely enhanced my desire to do so! And Paris is definitely at the top of the list of places I want to see. The sights, sounds, smells, food (oh my gosh the macarons!) described in this book swept me away and made me wish I was there in Paris too!

I have to mention Dee, Allyson’s classmate at university, because he might have been my favourite character in this book. I think he and Allyson were able to help each other in a lot of ways. On the flip side of that was Allyson’s friendship with Mel, her high school BFF who was with her on the Europe tour. Mel was definitely the more dominant person in their friendship, and as Allyson began to change after her day with Willem, they grew apart. In my experience, this is totally natural when two friends go to different schools in different cities, and it was interesting to see that Allyson wasn’t the only one going through a transformation. Every time she saw Mel, she’d changed something about her look – her hair, her clothes, something – but for some reason, people tried to resist Allyson’s efforts to grow and change. It was like they had a set idea of who she was and had a very difficult time dealing with any changes they saw in her. Allyson’s relationships with Mel and with her parents go through some major growing pains in this book, which felt real and true to me.

I knew people loved this book, so I had high hopes, but I was still blown away by how much I loved this book. It was a fabulous story of Allyson’s journey towards self-discovery and being in charge of her own life, of knowing what she wants and owning it, and working to get it. And since the companion book, Just One Year, will be from Willem’s point of view, I know that I have to read that when it comes out later this year! I can’t wait!

I fell in love with this book, with these characters, and it’s a total must-read.