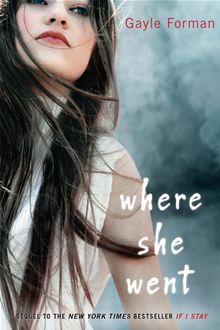 Where She Went By Gayle Forman

Published by Dutton Juvenile on April 5, 2011

Picking up several years after the dramatic conclusion of If I Stay, Where She Went continues the story of Adam and Mia, from Adam's point of view. Ever since Mia's decision to stay - but not with him - Adam's career has been on a wonderful trajectory. His album, borne from the anguish and pain of their breakup, has made him a bona fide star. And Mia herself has become a top-rate cellist, playing in some of the finest venues in the world. When their respective paths put them both in New York City at the same time, the result is a single night in which the two reunite - with wholly satisfying results.

Warning: Definite spoilers for If I Stay.

This is the sequel to If I Stay, which I read earlier this year.

While I liked If I Stay, I liked this book even more. This time, the story is told from Adam’s perspective, a few years after the events of If I Stay. We learn that Adam’s band, Shooting Star, is huge. He’s a major rock star now, dating a famous Hollywood actress. The band is preparing for a major tour, and Adam takes an extra day in New York before he is supposed to follow the band. While he’s walking around the city, he discovers a flyer for a concert featuring Mia, and he goes to hear her play.

Despite the appearance of success, it turns out that Adam is not doing well. His relationships – with the band, his manager, his girlfriend – are rocky, and he has a lot of anxiety when he’s in crowds. He fears being recognized while in public, because he doesn’t want to be swarmed and surrounded by mobs of fans and paparazzi. Certain subjects are off-limits when doing interviews, too, and he has gone to great lengths to make sure that no one mentions Mia. So far, he seems to have successfully kept her name, their relationship, out of the limelight.

I loved getting Adam’s side of the story, learning about what happened to him in the aftermath of the accident. It was so touching to see how he was affected by the deaths of her family members, and then learning that Mia had dumped him – and the way she did it – was heartbreaking, after all that had happened during If I Stay.

The end of that relationship, though, was the catalyst for Shooting Star’s first major label album, the one that catapulted the band to superstardom. I think Adam had a lot of guilt about that, about his success coming from such a tragedy, and one that he didn’t think was rightly his. It was Mia’s family, after all.

Mia invites Adam backstage after her concert, and they end up spending the rest of the day/night together, touring New York City. Mia is about to head off on a tour to Asia, and Adam has to meet the rest of the band in London, and things between them were definitely awkward at first: the small talk, the avoidance of certain subjects. However, as the night went on, they finally acknowledged the things that were unsaid and unresolved, and it was so emotional! I was sucked right into this book from the beginning, and when Adam and Mia had their moment on the bridge, talking about how and why she broke up with him, why she just stopped communicating with him, I felt like I couldn’t read the words fast enough. I had to know, too.

I loved the ending. It was so optimistic. I would have been happy if it had ended with Adam and Mia moving on with separate lives, but with closure. I could have understood that and been fine with it. However, I’m so happy this book ended the way it did, and even though it involved some difficult decisions on Adam’s part (although maybe not so difficult; it seemed as though he’d already decided but just needed to take action), it felt so right.

I totally loved this book and if you are a fan of contemporary YA, this is a must read (after you read If I Stay, of course).