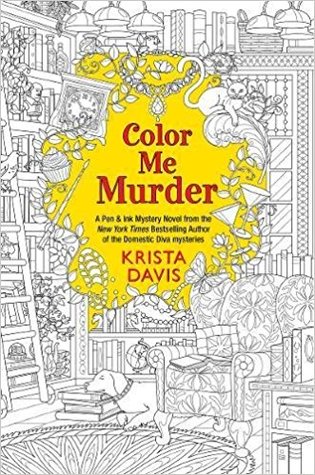 By day, Florrie Fox manages Color Me Read bookstore in Georgetown, Washington D.C. By night, she creates her own intricately detailed coloring books for adults, filling the pages with objects that catch her eye. There’s plenty of inspiration in her new apartment–a beautiful carriage house belonging to Professor John Maxwell, Florrie’s boss. He offers the property to Florrie rent-free with one condition–she must move in immediately to prevent his covetous sister and nephew from trying to claim it.

When the professor’s nephew, Delbert, arrives, he proves just as sketchy as Florrie feared. But the following morning, Delbert has vanished. It’s not until she visits the third floor of the store that Florrie makes a tragic discovery–there’s a trap door in the landing, and a dead Delbert inside. The esteemed Professor Maxwell is an obvious suspect, but Florrie is certain this case isn’t so black and white. Doodling clues, she begins to consider other colorful characters on the scene, all with a motive for murder. With a killer drawing closer, Florrie will need to think outside the lines . . . before death makes his mark again.

I was very excited to start this new series, and had it sitting on my wish list for a few months. I have read a few other books by Krista Davis (I love her “Paws and Claws” mysteries) that I really enjoyed and thought this sounded like a promising series. Unfortunately, some parts of the book didn’t live up to the hype that I had created.

I thought this book had a great start — I loved the setting of Georgetown, which sounded like a vibrant neighbourhood. The bookstore was so much fun to imagine — definitely a place that I would like to work. And when Florrie moves into the carriage house in Professor Maxwell’s backyard, I loved picturing the small building surrounded by beautiful gardens and a mansion. I want to live there!

I enjoyed the main characters — Florrie was very smart and I liked that she would use her artistic talents to draw in order to remember all the clues she had uncovered. Professor Maxwell seemed sweet, and I liked all of Florrie’s coworkers and family. The book really had a great setup, and I will admit I had a hard time putting the book down at the beginning.

Unfortunately, as the story moved on the plot seemed to have a few more holes or gaps than I wanted. A local policeman moved in to Florrie’s carriage house to help protect her, but there really wasn’t any development to their relationship. And wouldn’t this be against some sort of police policy, given that she was suspected of having some kind of involvement? I thought there could have been some nice development of this relationship, but it just seemed taken for granted — it was assumed that they liked each other without ever taking the time to show that they liked each other. As well, the murder mystery had quite a few (I would argue unnecessary) twists and turns that made it more complicated than it needed to be — I think a simpler plot would have been more effective because as it was I found I lost interest as the story went on.

All in all, I think this series has an interesting premise, a good cast of characters, and a fun setting. I think the plot just unravelled towards the end. I will definitely read the next book in the series, but I will admit I am not as excited about it as I would like to be.

One Response to Lil’ Pingwing’s Cozy Corner: Color Me Murder