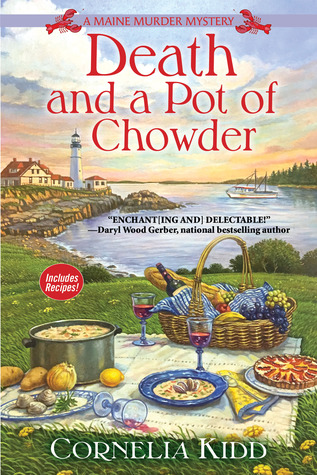 Death and a Pot of Chowder By Cornelia Kidd

Maine’s Quarry Island has a tight-knit community that’s built on a rock-solid foundation of family, tradition and hard work. But even on this small island, where everyone knows their neighbors, there are secrets that no one would dare to whisper.

Anna Winslow, her husband Burt and their teenage son have deep roots on Quarry Island. Burt and his brother, Carl, are lobstermen, just like their father and grandfather before them. And while some things on the island never seem to change, Anna’s life is about to take some drastically unexpected turns. First, Anna discovers that she has a younger sister, Izzie Jordan. Then, on the day she drives to Portland to meet Izzie for the first time, Carl’s lobster boat is found abandoned and adrift. Later that evening, his corpse is discovered—but he didn’t drown.

Whether it was an accident or murder, Carl’s sudden death has plunged Anna’s existence into deadly waters. Despite barely knowing one another and coming from very different backgrounds, Anna and Izzie unite to find the killer. With their family in crisis, the sisters strive to uncover the secrets hidden in Quarry Island—and, perhaps, the ones buried within their own hearts.

I was looking forward to starting this book — it is a first in a new cozy series set in Maine, on an island. Just that description alone was enough to get me interested. But then when I read in the introduction that this was the same author who wrote the Mainely Needlepoint series (under the name Lea Waite) I was definitely excited to start this book!

One way in which this series differed from the Mainely Needlepoint series is that it felt much more character-driven. While there is a murder, quite a bit of the start of the book followed Anna’s discovery of her long-lost sister, Izzie. Anna brings Izzie (who lives in Connecticut) to her small island once word spreads to her about her brother-in-law going missing while he was out fishing. There was quite a bit of depth and focus in this book on what it is like to live on an island, especially as someone who lives there full-time. People on the island appear to have a very close community and a strong bond within families, due to the hardship and challenge of living there year-round — both in terms of the weather conditions but also the difficult work that many of the residents engage in through fishing and lobstering. This sense of community and family sets an interesting contrast with Izzie, who was raised by an absentee father (the same one who abandoned Anna’s mother) and hasn’t experienced the strong bonds that Anna has with her mother and grandmother, who also live together on the island.

I liked the storyline of the long-lost sister. Anna and Izzie seem so different in ways — Izzie dreams of opening her own restaurant, whereas Anna — who married and had a child at a young age — struggles to even think of what dreams she has for her own life when Izzie asks her. They work well together, though, as they try to uncover who killed Carl, especially after Anna’s husband is arrested for the murder. Anna and Izzie make a great pair, and I love where their relationship moves to by the end of the first book. As someone who has sisters and considers them to be her closest friends, I love reading about them teaming up to solve crimes. I also enjoyed Anna and Izzie’s shared love of “Anne of Green Gables”.

I did get a little frustrated with Anna’s hesitation to question her teenage son on his knowledge of the murder. Granted, he seemed upset by the death of his uncle and seemed to struggle with a way to express it, which really just came out in him fighting with his mom and storming out of the house. As the mother of a young son this book made me nervous about his teenage years. 🙂

The murder mystery was excellent. I really enjoyed all the twists and turns, and wasn’t able to guess who the killer was. I also liked that the book wasn’t entirely about the mystery, but really was about these two sisters discovering each other and learning about life on Quarry Island. This was a great first book in a new series — so much so that I was disappointed when I finished the book and realized there wasn’t another for me to start reading immediately. I am highly anticipating when the next one comes out.