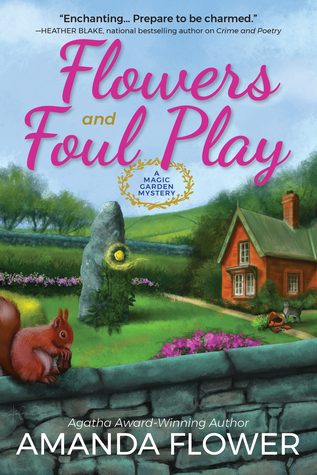 Florist Fiona Knox’s life isn’t smelling so sweet these days. Her fiancé left her for their cake decorator. Then, her flower shop wilted after a chain florist opened next door. So when her godfather, Ian MacCallister, leaves her a cottage in the Scottish Highlands, Fiona jumps on the next plane to Edinburgh. Ian, after all, is the one who taught her to love flowers. But when Ian’s elderly caretaker Hamish MacGregor shows her to the cottage upon her arrival, she finds the once resplendent grounds of Duncreigan in a dreadful shambles—with a dead body in the garden.

Minutes into her arrival, Fiona is already being questioned by the handsome Chief Inspector Neil Craig and getting her passport seized. But it’s Craig’s fixation on Uncle Ian’s loyal caretaker, Hamish, as a prime suspect, that really makes her worried. As Fiona strolls the town, she quickly realizes there are a whole bouquet of suspects much more likely to have killed Alastair Croft, the dead lawyer who seems to have had more enemies than friends.

I will admit that I didn’t know if I wanted to finish this book after reading the first few chapters. I wasn’t certain if I would enjoy a book about a magical garden. I was terribly wrong — this book was such a page-turner that I ended up staying up too late trying to finish it.

Fiona Knox has come to the Scottish Highlands in order to visit the cottage that was left to her by her recently deceased godfather. Having just been left by her fiancé, and having lost her flower shop, Fiona quickly makes the trip to Scotland. However, soon after arriving Fiona finds the body of her godfather’s lawyer in her garden. When she arrives the garden looks dead, but she is told by the cottage’s caretaker, Hamish, that her presence will make the garden bloom again.

When Hamish becomes a suspect in the lawyer’s murder, Fiona works to solve the case and take suspicion off her friend.

I will admit that the idea of a magic garden turned me off initially. I didn’t really know what to make of it, but I am so happy I kept reading the book. I was excited to read a book set in the Scottish Highlands (I have been watching a lot of “Escape to the Country”, a BBC show that takes homeowners from big cities and helps them purchase homes in the countryside. My favourite ones are the episodes that take place in Scotland). Fiona’s new home is called Duncreigan, a small cottage outside of a village just south of Aberdeen. I loved the descriptions of the area, from the vegetation to the stone houses in the middle of the village.

Fiona quickly runs into some small-town politics when she starts exploring the village — it seems that she is viewed as an outsider, or is painted with the same brush as her godfather. From some of the locals at the pub, to the town minister, not everyone is happy to have a new American in town. But she does make friends with Presha, who owns a tea shop, and her twin brother Raj, who owns the laundromat. And she spends a lot of time with Hamish, who always has his red squirrel Duncan hanging around.

There was some romantic tension with Chief Inspector Neil Craig, but the relationship didn’t progress too far. Fiona seems to still be too upset after her breakup with her fiancé. I’m hoping that Fiona and Craig do start to date in the next book! He’s a great character.

I was sad when discovering who the murderer was, only because I really liked them. It was a bit of a twist for the author to choose a likeable character as the murderer, as I definitely wasn’t expecting it.

So while I initially was hesitant about reading a book with a magical theme, I realized very quickly how wrong I was. This book had a great setting, a great cast of characters and a mystery that was hard to solve. I highly recommend this series for anyone wanting to read a book that has gardens, Scotland, and a cozy small-town (or village) setting.