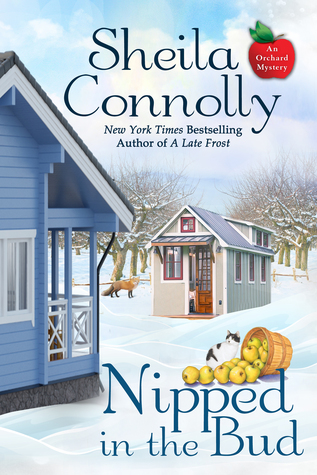 Nipped In the Bud By Sheila Connolly

Published by Beyond the Page Publishing on October 29, 2018

Winter still has a firm stranglehold on the small town of Granford, and newly married orchard owner Meg Chapin is restless to begin her spring pruning and planting, while Seth busies himself with a new project of his own. But their relative peace is shattered when a gunshot breaks the winter silence and they discover the body of a dead woman on their land. What’s just as troubling is that the state police have hushed up the murder and are warning Meg not to investigate.

Never one to sit by idly with a killer on the loose, Meg starts digging for clues and probing for answers as discreetly as she can. When the victim turns out to have been an undercover reporter doing a story on the blossoming trade in illegal drugs in the area, Meg’s stunned to learn that this very modern crime has come to sleepy Granford. Unwilling to accept that the nasty business has put down roots so close to home—and led to a murder that occurred literally in her own backyard—Meg is determined to nip it in the bud before the town she knows and loves turns rotten . . .

The Orchard Mystery series is one of the first cozy series that really hooked me, and got me addicted to New England cozies! For this reason I always really look forward to new books that come out in the series, and I was very excited to get a chance to review this book.

One night while together at home, Meg and her husband Seth hear a gunshot in the woods behind their orchard. After initially dismissing the shot as one from a hunter, they soon discover a woman’s body and begin to wonder if it was murder. As the investigation unfolds, they find out that the murder victim was a reporter doing an undercover investigation on drug dealing in the small town of Granford. Now, Meg and Seth are faced with a murder that took place behind their home, and the reality that drugs have come to their sleepy town.

I love that the book took place in the winter and we got to experience the restlessness that Meg feels from not being able to work on her orchard. I imagine this is a common experience amongst farmers, and it was very relatable (especially as winter is almost here, and the days are getting shorter and colder). It was a great setting and I think helped to explain why Meg got so invested in the murder investigation (beyond the fact that it took place right next to her home).

I thought it was timely for the book to talk about illegal drugs being sold and used in smaller towns, though I think a lot of that discussion focused on how shocked everyone was that drugs could be in their town.

I hate to say it, but I found that the mystery felt a little thin. So much of the story was dedicated to Meg and Seth just talking in circles, trying to make sense of the crime. It felt a little repetitive, even though the story was really great — an undercover reporter gets murdered investigating a local drug trade! A super exciting plot idea. But, it just didn’t pan out as well as I would have liked.

I’m a big fan of Sheila Connolly’s work. I usually love this series, but it just didn’t have the same strength that previous books had, which is too bad. I feel bad writing a review that isn’t 100% positive. The book was still good, just not as good as I would have liked.