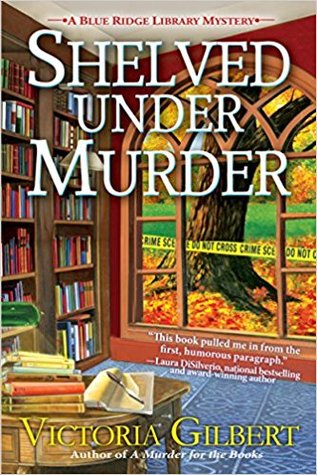 Shelved Under Murder By Victoria Gilbert

October in Taylorsford, Virginia means it’s leaf peeping season, with bright colorful foliage and a delightful fresh crew of tourists attending the annual Heritage Festival which celebrates local history and arts and crafts. Library director Amy Webber, though, is slightly dreading having to spend two days running a yard sale fundraiser for her library. But during these preparations, when she and her assistant Sunny stumble across a dead body, Amy finds a real reason to be worried.

The body belonged to a renowned artist who was murdered with her own pallet knife. A search of the artist’s studio uncovers a cache of forged paintings, and when the sheriff’s chief deputy Brad Tucker realizes Amy is skilled in art history research, she’s recruited to aid the investigation. It doesn’t seem to be an easy task, but when the state’s art expert uncovers a possible connection between Amy’s deceased uncle and the murder case, Amy must champion her Aunt Lydia to clear her late husband’s name.

That’s when another killing shakes the quiet town, and danger sweeps in like an autumn wind. Now, with her swoon-inducing neighbor Richard Muir, Amy must scour their resources to once again close the books on murder.

I only recently discovered the Blue Ridge Library Mysteries, but have so far thoroughly enjoyed this new series! I must also say that the second book was better than the first!

While picking up some paintings that are to be donated for a library sale, Amy and her boyfriend Richard discover the artist murdered in her studio. If that wasn’t bad enough, they also discover forged paintings hidden behind a false wall. Amy and Richard must not only try to solve the murder, but also have to unravel the mystery of who forged the hidden paintings, and for what purpose.

I have to say that I loved the forgery storyline of this book. Amy helps out the investigation at first by researching missing paintings until official art investigators can be brought in. It was so interesting to learn about how forgers work and how investigators can use different tools to discern an original painting from the forgery.

This book further explored the relationships that were introduced in the first Blue Ridge Library Mystery and really enhanced the characters. We were able to learn more about their motivations, and in a few cases, why they had an inability to move on from the past or could only see the past through rose-coloured glasses (for example, Amy’s aunt). A lot of the characters in this book had to face some harsh realities, but they seem to come out of those difficulties for the better.

As in the first book, I really enjoyed the relationship between Amy and Richard. I was happy that we learned more about Richard and his dancing background. I’ll admit that I know nothing about dance, but I liked reading about his performances and his choreography. There has been some discussion of a previous dance partner of his that disappeared after facing rejection from dance companies for her size — I’m hoping that we will get to see her in a future book.

A theme that has come up in both books in the Blue Ridge Library Mysteries is how events in the past can impact the present. I’ve enjoyed how layered the mysteries have been in both books and how they incorporate so many past events. I think it really adds to the realism of small-town life, where people do not forget the past and hold grudges for as long as they can.

I think the only downside to the book was that it was easy to identify who the killer was — there was just too much detail and a few obvious clues given to the reader that the protagonist did not pick up on. I think that can oftentimes be part of the experience of reading cozies — someone has to be the killer, and it is oftentimes a new character. However, there was a lot more depth to the story as to why the killer did what they did, so it was nice to at least have that surprise at the end.

This was a great second book in a series and added a lot of depth to the relationships between characters while introducing a fun storyline. Definitely a recommended read!