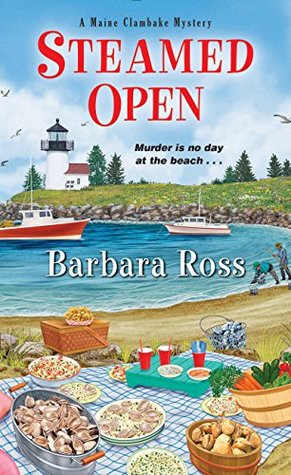 It’s summertime in Busman’s Harbor, Maine, and the clamming is easy—or it was until a mysterious new neighbor blocks access to the beach, cutting off the Snowden Family Clambake’s supply. Julia Snowden is just one of many townspeople angered by Bartholomew Frick’s decision. But which one of them was angry enough to kill?

Beachcombers, lighthouse buffs, and clammers are outraged after Frick puts up a gate in front of his newly inherited mansion. When Julia urges him to reconsider, she’s the last to see him alive—except the person who stabs him in the neck with a clam rake. As she pores through a long list of suspects, Julia meets disgruntled employees, rival heirs, and a pair of tourists determined to visit every lighthouse in America. They all have secrets, and Julia will have to work fast to expose the guilty party—or see this season’s clam harvest dry up for good.

In this book, Julia is sad to hear of a the passing of a prominent member of the Busman’s Harbour community. What is even more distressing is that the individual left their entire estate to a long lost relative, Bartholomew Frick, who decides to close access to a local beach, cutting off both the locals’ use of the beach for fun, but also hurts Julia’s business by cutting off access for people who dig for clams (which Julia then uses at her Clambake business). When Frick is found murdered in his new mansion, Julia seeks to not only uncover the murderer but also wants to know who inherits the house now, and what that means for the beach.

I won’t even try to deny how excited I was to read this book. The Maine Clambake Mystery series is my favourite cozy series, and I find the books keep getting better and better! Each book adds more depth to the relationships in Julia’s circle of friends and family, and continues to add interesting mysteries to the series.

I really liked the mystery surrounding Frick’s murder — the tension between Frick and the townspeople was a very real and believeable problem — what do you do when a new owner wants to make their property private even if it has been previously used by the larger community? I imagine the tension in a case like this would be especially high given that people make their livelihood from the land (such as in the case of people who dig for clams).

One thing that I have found in the last few Clambake books is that they really incorporate the family’s history into the story and I am really enjoying that continuing thread. Having to research secret children, or long-past murder cases, or even trying to find what happens to cases held by law firms that closed years and years ago added a really fun element to the whole storyline.

And while it was part of the secondary plot, I like that we are slowly uncovering more about Julia’s boyfriend, Chris. He’s always been quiet and almost secretive about some things, and this story really brought out his own history and family troubles. I like him and Julia together, though I see that there may be problems in the future, but I was happy to have part of this book focus on bringing out his story.

As well, I liked hearing about the developments made to the family’s house on the island. Since the first book, Windsholme, Julia’s mother’s family home, has fallen into disrepair and even suffered through a fire. I love that the family is starting to restore the house and even is making space for the entire family to live on the island. I love the idea — it’s so romantic (though I doubt my family would be able to stay on the island together for very long. We might go a little stir crazy 🙂 ).

This was an excellent book. The series keeps getting better and better.