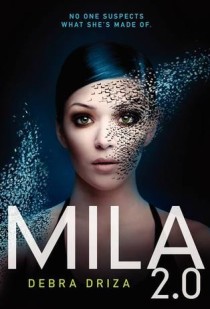 Ooh, I’ve wanted to read this book since I first heard about it! Spoiler alert!

Mila 2.0 is the first book in an electrifying sci-fi thriller series about a teenage girl who discovers that she is an experiment in artificial intelligence.

Mila was never meant to learn the truth about her identity. She was a girl living with her mother in a small Minnesota town. She was supposed to forget her past—that she was built in a secret computer science lab and programmed to do things real people would never do.

Now she has no choice but to run—from the dangerous operatives who want her terminated because she knows too much and from a mysterious group that wants to capture her alive and unlock her advanced technology. However, what Mila’s becoming is beyond anyone’s imagination, including her own, and it just might save her life.

Mila 2.0 is Debra Driza’s bold debut and the first book in a Bourne Identity-style trilogy that combines heart-pounding action with a riveting exploration of what it really means to be human. Fans of I Am Number Four will love Mila for who she is and what she longs to be—and a cliffhanger ending will leave them breathlessly awaiting the sequel.

I loved the way this book didn’t take too long to establish the story and for Mila to learn the truth about who she is: an android whose memories have all been implanted. She is the result of an experiment, and there are people looking for her. The woman she believes to be her mother is actually a scientist who helped create her and then stole her away from the lab.

I also loved the action scenes in this book – it totally reminded me of the Bourne Identity! However, somewhere around the midpoint of the novel, I felt like things started to drag, perhaps because the story had been pretty action-packed in the beginning but once Mila was taken in by General Holland, she was confined so the pace slowed a bit by comparison. It picked up again for me by the end, though, and overall I was satisfied with the pacing.

Am I the only one who thinks Mila is way too trusting of Hunter or am I being paranoid and unnecessarily suspicious? I just couldn’t think of any reason for Hunter – someone Mila didn’t really know or spend all that much time with, when you think about it – to come up so often unless he’s part of something bigger. I think I just didn’t buy the romance or the trust Mila placed in Hunter, especially in the face of such dangers, based on their brief interactions. But I guess I have to wait for the next book to see if I’m right about that hunch.

I was intrigued by Lucas, a character who seems to be working for General Holland reluctantly, possibly against his will, and I hope he pops up again in the next book.

Because Mila was initially unaware that she wasn’t actually human, this book made me think a lot about what it is that makes us human. Mila doesn’t feel as much pain as humans and she has super-human abilities, but she feels human emotions, and it seemed like she was beginning to have real memories towards the end of the book (unless I misread something?). I liked contrasting her to Three (the Mila 3.0), who we’re told doesn’t feel emotions, but I thought I was detecting some sort of emotional attachment by Three to General Holland.

Overall, this was a very fun, action-packed read that was light on the romance. I’m really looking forward to the sequel because I want to find out more about Hunter, and the other factions that are looking to get their hands on Mila! I definitely recommend this book to YA fans looking for an action-packed thriller.