No Safety In Numbers 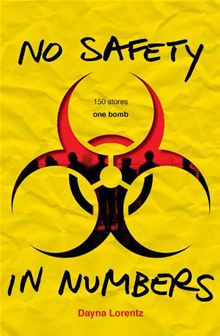 No Safety in Numbers By Dayna Lorentz

Series: No Safety in Numbers #1

When a strange device is discovered in the air ducts of a busy suburban mall, the entire complex is suddenly locked down. No one can leave. No one knows what is going on.

At first, there's the novelty of being stuck in a mega mall with free food and a gift certificate. But with each passing day, it becomes harder to ignore the dwindling supplies, inadequate information, and mounting panic.

Then people start getting sick.

Told from the point of view of two guys and two girls, this is a harrowing look at what can happen under the most desperate of circumstances, when regular people are faced with impossible choices. Some rise to the occasion. Some don't.

I picked this up at the library last night when I was there looking for a different book, and started reading it right there in the aisle.

I’ve mentioned before how much I love reading survival-type stories, and when I learned that this book was a survival story set in a mall, I knew it would end up on my TBR list. The mall is one of my favourite places!

The story follows four teenage protagonists: Marco, a busboy at a restaurant in the mall; Lexi, who is spending the day at the mall with her father and mother, a senator; Ryan, a high school football player who bumps into two older boys on the team; and Shay, who is at the mall with her grandmother and her younger sister.

When a bomb is discovered in the mall’s parking garage, Lexi’s mother takes charge and quarantines everyone while mall security and, eventually, the government try to figure out what kind of bomb it is. The people in the mall are not told anything at first except that there is a security concern and they are not allowed to leave the mall. As you can imagine, the longer they’re trapped inside, the panic grows and things seem ready to turn into chaos.

As the time turns into days spent in the mall, people begin getting sick, and on top of that, they still don’t know exactly why they’re stuck in the mall or when they can get out. They’re hungry, uncomfortable, and the mall bathrooms are dirty. The staff of the various shops and restaurants begins to shrink as they either get sick or desert their jobs. Some people turn violent. When hazmat crews show up, it’s a sign that things are definitely worse than a mere security concern.

Our four protagonists cross paths over the course of the novel. Marco and Ryan have a few uneasy encounters, as the two other football players that Ryan teams up with don’t like Marco, but try to turn to him for help escaping the mall (as an employee, Marco knows the ins and outs of the building). Shay and Ryan have a blossoming romance, but Marco has feelings for Shay as well, and Ryan finds his loyalty to his football friends in conflict at times with his feelings for Shay. Lexi, a tech genius, crosses paths with the others briefly, but spends most of her time either fighting with her mother, or hanging out with Ginger and Maddie, two popular girls also trapped in the mall. Lexi finds herself wanting to impress them and, for a time, thinks that she’s made friends, but as the situation in the mall worsens, these friendships may be called into question.

For a while, I thought this was a pretty fun survival story, but when the nature of the bomb is revealed to the people trapped in the mall, after five or six days, things got pretty scary. The situation in the mall just turned into utter chaos, and the government aid suddenly disappeared. Our protagonists struggle with, variously, trying to escape from the mall, trying to find their loved ones from whom they were separated, the death of a loved one, trying to help the sick, and, of course, just trying to survive as the violence in the mall increased.

I liked this book – the plot moved quickly and kept me reading (I finished it in one sitting), and of course, I love the whole survive-the-mall idea. LOVE IT. I liked that the story followed four protagonists, and seeing how each one reacted to the situation. My big issue was that, silly me, I didn’t realize that this was the first in a series until I got to the last page of the book. So while I was reading anxiously, hoping to find out who placed the bomb and why, and whether our protagonists would finally get out of the mall after spending six days trapped inside, it looks like I’m going to have to wait until the next book comes out and hope it answers those questions.

However, after sleeping on it, I am looking forward to reading more about these characters and how the authorities will handle things. Maybe the people in the mall will have to create their own mall society…who knows! All I know is I’m now eagerly anticipating the sequel, No Easy Way Out, whenever that comes out.