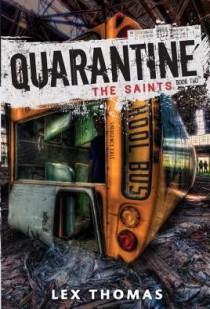 A cross between the Gone series and Lord of the Flies, Quarantine #2: The Saints continues this frenetically paced and scary young adult series that illustrates just how deadly high school can be.

McKinley High has been a battle ground for eighteen months since a virus outbreak led to a military quarantine of the school. When the doors finally open, Will and Lucy will think their nightmare is finished. But they are gravely mistaken.

As a new group of teens enters the school and gains popularity, Will and Lucy join new gangs. An epic party on the quad full of real food and drinks, where kids hookup and actually interact with members of other gangs seemed to signal a new, easier existence. Soon after though, the world inside McKinley takes a startling turn for the worse, and Will and Lucy will have to fight harder than ever to survive.

The Saints brings readers back to the dark and deadly halls of McKinley High and the QUARANTINE series.

I really enjoyed the first book, The Loners, when I read it last year. I loved the action, the pacing, and the unpredictability of it. This sequel was one of my most anticipated books of this year, and I was so excited to read it.

What I liked about this book was seeing how certain elements established in the first – each gang having its own territory, the brutal food drops, Sam and the Varsity gang’s domination – were shaken up here.

We learn early on in this book that the life everyone inside McKinley has gotten used to is going to change, because of things going on in the outside world. I appreciated getting some information about things going on outside McKinley, which is something I’d been wondering about throughout the first book.

A group of kids from a private school gain entry to the school, before it’s sealed up (I won’t spoil those details). These kids fill the McKinley students in on life on the outside for the past 18 months, and eventually are seen as a gang of their own, called The Saints. Their leader is charming, and seems to fill the McKinley kids with awe. His arrival and clash with Sam, the Varsity leader, sets off a whole chain of events, shaking up the hierarchy within the school.

I missed David in this book, especially since his absence meant I was left with a lot more of Will, who was not a favourite of mine in the last book. However, because I got more of Will’s perspective here, I felt like I came to understand him a bit better. I definitely liked Will more after reading this book than I did during The Loners.

I was very interested in Lucy’s transition from Loner to Slut.  Yes, that’s right, she is no longer a Loner – but after the events early on in the book, there aren’t many left in their gang to begin with, and one by one, they all join different gangs and the Loners are no more. Initially I was really sad that the Loners were splitting up, but I grew to love the way the authors weren’t afraid to shake things up, e.g. killing off certain characters or disbanding the Loners.

If there’s one big complaint I had with this book, it’s about the Will and Lucy romance. I just wasn’t feeling it, especially since she had been dating David. I don’t know, it just seemed like they were together just to have some romance in the book, you know? Or maybe I’m just biased because I like David better than Will. Who knows.

In case anyone was wondering, this book is totally just as violent as the first. I personally liked that, but be warned, if you didn’t like the violence and brutality in The Loners, you won’t find this book any easier to read.

Overall, I really liked this book.  It was a good sequel and had the same excitement and intensity as the first. I don’t know how many more books are planned for this series, but I’m really looking forward to the next one!