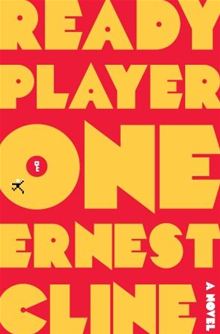 Ready Player One By Ernest Cline

Published by Crown Publishers on August 16, 2011

In the year 2045, reality is an ugly place. The only time teenage Wade Watts really feels alive is when he's jacked into the virtual utopia known as the OASIS. Wade's devoted his life to studying the puzzles hidden within this world's digital confines, puzzles that are based on their creator's obsession with the pop culture of decades past and that promise massive power and fortune to whoever can unlock them. When Wade stumbles upon the first clue, he finds himself beset by players willing to kill to take this ultimate prize. The race is on, and if Wade's going to survive, he'll have to win—and confront the real world he's always been so desperate to escape.

I have heard a lot of good things about this book, and really wanted to read it over the Christmas holidays.

I absolutely loved this book. It has elements of fantasy, but I would say it’s mostly science-fiction, which I haven’t read much of, which made this a new reading experience for me.

I have written before about my love for dystopian and post-apocalyptic stories, so right from the beginning, I was intrigued. Wade Watts is a high-school student, whose parents died when he was young. When the novel begins, he lives with his aunt in a trailer, along with other people who rent out sections of the trailer. He attends school and hangs out with Aech, his only friend, in the virtual world of the OASIS.

James Halliday’s death was major news, especially once his virtual will revealed that he had hidden three puzzles (referred to as easter eggs, which, in the video game world, are intentional hidden messages, jokes, or events) throughout the OASIS, and that whoever finds them all and solves the puzzles will inherit his entire fortune, along with his OASIS avatar’s powers and abilities. Wade devotes most of his time to searching for eggs, and eventually finds the first one. The discovery sets off a chain of events that leave Wade in danger.

Without revealing too much of the plot, I think I can safely say that Wade decides that, for his own safety and to protect the OASIS from large corporations who would monetize it, he must find the other two keys and solve their puzzles, before anyone else can.

There were a lot of things that I loved about this book. I found Wade an easy character to relate to, and given the tragedies in his young life, he was very easy to root for, as well. I liked the futuristic setting, and the premise that reality had become so miserable for most people that they chose to spend most of their time in a virtual world, where they could be anyone and do anything.

The worlds of the OASIS are very vividly described, and I really enjoyed the vastness and variety of the worlds. I also liked the action sequences in the book. Because the worlds in the OASIS are so varied, the types of combat that Wade (as his avatar, Parzival) encounters are varied, as well. I liked the way the author was able to mix things up like that, and do it in a way that fit with the story.

Because I love video games, I loved all the references to gaming that are scattered throughout the novel. The majority of game and pop-culture references are from the 1980’s, and since I was born in the early 80’s, some of these were before my time. I was familiar with most references, although I could see how not understanding many of them would interfere with enjoyment of the story. The book comes across as the author’s homage to his favourite games, movies, television shows, and songs of his youth and of early geek culture.

I think if you are a fan of science fiction, you can enjoy this book even if you aren’t a video game player, and vice versa. I really loved this book, and could not put it down. It was just so much fun to read! I am definitely recommending this one, although if you aren’t a science fiction or video game fan (or familiar with any 80’s pop-culture), you may have a tough time with this one.However,  I still think it’s worth a read!