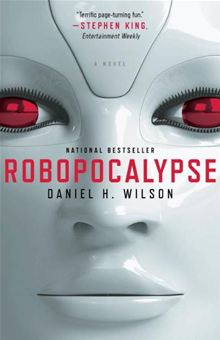 In the near future, at a moment no one will notice, all the dazzling technology that runs our world will unite and turn against us. Taking on the persona of a shy human boy, a childlike but massively powerful artificial intelligence known as Archos comes online and assumes control over the global network of machines that regulate everything from transportation to utilities, defense and communication.

In the months leading up to this, sporadic glitches are noticed by a handful of unconnected humans – a single mother disconcerted by her daughter’s menacing “smart” toys, a lonely Japanese bachelor who is victimized by his domestic robot companion, an isolated U.S. soldier who witnesses a ‘pacification unit’ go haywire – but most are unaware of the growing rebellion until it is too late.

When the Robot War ignites -- at a moment known later as Zero Hour -- humankind will be both decimated and, possibly, for the first time in history, united. Robopocalypse is a brilliantly conceived action-filled epic, a terrifying story with heart-stopping implications for the real technology all around us…and an entertaining and engaging thriller unlike anything else written in years.

I had this book on my TBR for a long time, and picked it up from the library last week.

I read Wilson’s Amped not long ago, and found it somewhat interesting but felt that I lost interest in the characters and story at a certain point. This book, which I think was written first but which I read second, was more to my liking.

The structure of this book reminded me of World War Z, which was presented as a series of interviews with survivors of the zombie war. Similarly, the chapters in this book are constructed using either information recorded by robots or survivor recollections, or a combination of both. I like that method of storytelling. Since the book chronicled the events leading up to the robot war, and then the war itself, following several characters in different geographical areas, I thought that it was a good way to structure the book, rather than the typical novel format.

I didn’t really feel attached to the characters, and perhaps that’s partly due to the book’s format, but I was so interested in the events taking place throughout the book that I was able to overlook that.

The book is set in the near future. I thought it was a very plausible future, and easy to read about as it doesn’t seem that far off from our use of and reliance on technology right now (cars that drive themselves, for example). Unlike the zombie apocalypse,  there is a single boss calling the shots here, and every time the story veered towards him (Archos), I was extra intrigued. There was a lot of interesting stuff in this book about reliance on technology, how we connect to each other, and what it means to be human and alive (or at least, what we think it means).

This feels like a bit of a lazy post, since I don’t think I’ve said as much as I usually do, but I just don’t feel like writing a big long post at the moment. I did like reading this, though, and if you’re a science fiction fan, I definitely recommend this book.