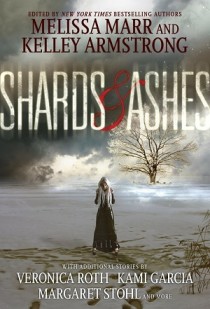 I don’t often read short story collections,  but when I heard that these were dystopian stories, I knew I had to check it out.

The book is edited by Melissa Marr (whose Graveminder I read and loved) and Kelly Armstrong, and contains stories by Veronica Roth, Kelley Armstrong, Margaret Stohl, Rachel Caine, Nancy Holder, Melissa Marr, Kami Garcia, Beth Revis, and Carrie Ryan. I’ve read works by some of these others, but others are new to me.

The world is gone, destroyed by human, ecological, or supernatural causes. Survivors dodge chemical warfare and cruel gods; they travel the reaches of space and inhabit underground caverns. Their enemies are disease, corrupt corporations, and one another; their resources are few, and their courage is tested.

I’m going to go through story by story and do mini-reviews.

Hearken by Veronica Roth
I thought the concept of this story was fascinating: Hearkeners are people who can hear either the life song or death song of the people around them (via a surgical implant that sort of translates the sound of the body’s cells generating or dying into music). Each Hearkener, after years of study, has to decide which song to hear. Darya, the protagonist, struggles to decide which song, life or death, to hear. Her decision is complicated by her relationship with her mother, who is dying, and her sister, who wants her to hear and record their mother’s death song. I really enjoyed this story, and would love to read a full novel set in this world!

Hmm, this one was entertaining but it didn’t quite do it for me. I liked the setting – in the future, after humans have learned of the existence of supernatural beings, and then scientists began performing experiments, leading to hybrids – and the world is basically in shambles. Our protagonist, Rayne, lives inside a fortress meant to keep humans safe from Outside. There are very strict rules governing life in the fortress, and the most severe punishment is to be banished and sent to the outside world. It turns out Rayne’s boyfriend is a werewolf, and is going to be banished. This story is about their relationship, their plan to stay together, and what Rayne is willing to do for the one she loves. It had some interesting parts and good moments, but it just didn’t add up to a solid whole, for me.

Necklace of Raindrops by Margaret Stohl

This was another story that I thought had an interesting premise, but didn’t totally deliver. The characters all have necklaces with drops (beads) that represent time, and the beads are like currency. I liked the idea but didn’t really connect to the characters.

This is another one that really intrigued me at the start, but the ending was a let-down. It might have worked better if it was longer, because there was a lot about the world that I wanted to know, and the relationship between Virtue and Xavier could have been developed a bit more.

I felt like parts of this story moved way too fast and skipped right by things, and then stopped right when things were getting a bit more interesting. Overall though, I felt like I had no idea what was going on!

From the title I was hoping for a zombie story, but it was about some god who came to Earth and ate humans? I don’t know. I liked the characters, but I didn’t love the story.

I think this is one of the only stories I really liked. It’s about a girl named Pheonix and her sister Sky, who live in New York City after the ozone layer has pretty much depleted and the sun causes severe burning and blistering to people who are exposed. One day Sky goes missing and Phoenix has to figure out what happened and find her. I really liked this one because it moved along at a good pace, the story was pretty straightforward, and like Hearken, it’s one that I’d read if it was a full-length novel.

Love is a Choice by Beth Revis

This was interesting, but I think it was related to the Across the Universe series, which I haven’t read (yet) so perhaps it all would have resonated more if I was familiar with that world and those characters. I loved the setting (space!) and the ideas, and it has definitely got me interested in finding out what happens to these characters. I think I have to pick up the books in this series!

Again, I was hoping for zombies, because I’ve read Carrie Ryan’s Forest of Hands and Teeth series and loved it. However, despite the lack of zombies, this was another good one, about disease and class and what we would do to keep loved ones safe. There was a nice romance, a sisterly bond, and some definite creepiness here!

Maybe short stories just aren’t for me. I might have liked more of these stories if they’d been longer and been able to establish characters and world-building. I think I just found it too difficult to keep adjusting to new characters and worlds. I didn’t love each story, but there were a few in here that I thought were pretty solid. If you’re a fan of dystopian stories, it might be worth checking out. 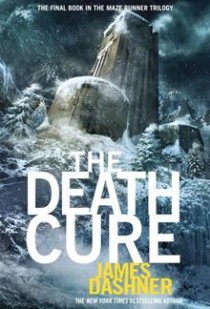 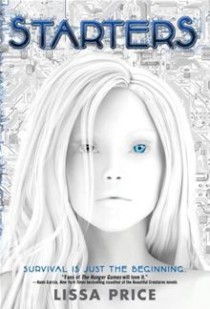