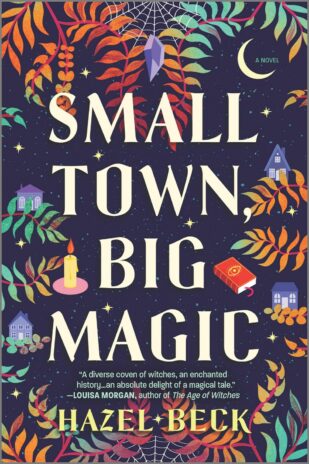 A witchy rom-com in which a bookstore owner who is fighting to revitalize a small midwestern town clashes with her rival, the mayor, and uncovers not only a clandestine group that wields a dark magic to control the idyllic river hamlet, but hidden powers she never knew she possessed.

No one has civic pride quite like Emerson Wilde. As a local indie bookstore owner and youngest-ever Chamber of Commerce president, she’d do anything for her hometown of St. Cyprian, Missouri. After all, Midwest is best! She may be descended from a witch who was hanged in 1692 during the Salem Witch Trials, but there’s no sorcery in doing your best for the town you love.
Or is there?

As she preps Main Street for an annual festival, Emerson notices strange things happening around St. Cyprian. Strange things that culminate in a showdown with her lifelong arch-rival, Mayor Skip Simon. He seems to have sent impossible, paranormal creatures after her. Creatures that Emerson dispatches with ease, though she has no idea how she’s done it. Is Skip Simon…a witch? Is Emerson?

It turns out witches are real, and Emerson is one of them. She failed a coming-of-age test at age eighteen—the only test she’s ever failed!—and now, as an adult, her powers have come roaring back.

But she has little time to explore those powers, or her blossoming relationship with her childhood friend, cranky-yet-gorgeous local farmer Jacob North: an ancient evil has awakened in St. Cyprian, and it’s up to Emerson and her friends—maybe even Emerson herself—to save everything she loves.

This sounded so fun and cozy and witchy! I was excited to get a copy from the library, and it’s the first book I finished in 2023.

Initially, I really liked this! I loved the small town setting (it kind of gave me Gilmore Girls vibes), and I loved Emerson’s can-do attitude, determination, and feminism. And the scene where she learned about her magic was really cool.

But as the story went on, everything I had liked about it began to annoy me. Emerson was just too much for me, and it drove me crazy how often she was told to do (or not do) certain things for her own safety, and that of her friends, but she immediately disobeyed and had to be rescued. It was so repetitive and made the story drag. But then the big ending battle / showdown felt like it was over too fast, for all the buildup, and there were threads that felt like they were left hanging purely for the purposes of justifying a next book, focused on her sister.

Also, while they synopsis says this is a witchy rom-com, I think that is totally misleading. I did not get rom-com from this at all.

That said, I really liked Emerson’s friends and the different kinds of magic, and I actually do want to read about her sister and what she’s been up to! So I likely will be checking out the next book in the series, but I hope the pacing is better.