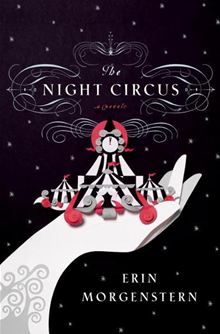 The Night Circus By Erin Morgenstern

Published by Doubleday on September 13, 2011

The circus arrives without warning. No announcements precede it. It is simply there, when yesterday it was not. Within the black-and-white striped canvas tents is an utterly unique experience full of breathtaking amazements. It is called Le Cirque des Rêves, and it is only open at night.

But behind the scenes, a fierce competition is underway—a duel between two young magicians, Celia and Marco, who have been trained since childhood expressly for this purpose by their mercurial instructors. Unbeknownst to them, this is a game in which only one can be left standing, and the circus is but the stage for a remarkable battle of imagination and will. Despite themselves, however, Celia and Marco tumble headfirst into love—a deep, magical love that makes the lights flicker and the room grow warm whenever they so much as brush hands.

True love or not, the game must play out, and the fates of everyone involved, from the cast of extraordinary circus performers to the patrons, hang in the balance, suspended as precariously as the daring acrobats overhead.

Written in rich, seductive prose, this spell-casting novel is a feast for the senses and the heart.

This book has been on my TBR for so long! I felt like everyone I knew, either in real life or the book blog world, had read and loved this book and I was just way late to the party.

So I’ve read the book. I’ve read glowing reviews and some negative ones, and find myself somewhere in the middle. I certainly didn’t love it, but I did like certain things about the book.

The Cirque des Reves is a traveling circus that appears in towns all over the world without warning, full of fantastical things to see and do, including performing acrobats, a fortune teller, a labrynth, a contortionist, and more. The main plot revolves around two older magicians, Hector and Alexander, and their proteges, Celia (Hector’s daughter) and Marco, whom they have trained as magicians from childhood for a duel of sorts. Of course, when Celia and Marco meet and eventually fall in love, it complicates things…

First, let me mention the things I liked. I really liked the atmosphere the author created. It was all described very vividly and I felt that I could easily picture everything. That helped me (initially) to get lost in the world Morgenstern created. The circus itself was fascinating to read about, with all of the different tents and performances. There was some truly wonderful, imaginitive stuff there, and I really did love reading those passages. Some of the minor characters, such as the contortionist Tsukiko and the clockmaker Friedrick Thiessen, were very interesting and wound up becoming more involved in the story’s events than I anticipated.

I also liked the idea of this competition between Marco and Celia (as well as the previous competitions, which were briefly mentioned throughout, usually in passing by Hector or Alexander). It made me feel that the events in this book were taking place on a very grand scale.

Time to address the things that frustrated me. I felt that the author withheld a lot of information from the reader. At first, I assumed that all would be revealed at some point in the novel, but I never felt that I really learned that much about the characters themselves or the competition between Celia and Marco. I viewed this competition as the impetus for the events of the entire book – the creation of the circus itself, really – and yet I never felt like I really knew anything about it and that definitely frustrated me. At times, Celia and Marco would ask questions about the competition, such as how a winner would be determined, how and when it would end, etc., and I eagerly read on, wanting the answers to those questions myself. Unfortunately, Celia and Marco (and the reader) were basically told that those answers were not important, or that they would find out later at some unspecified time. I took that to mean that I really would find out those answers at some point in the book, but never really felt like I got that, in the end.

I also never felt like I connected to Marco or Celia, and lack of connection to a character in a book I’m reading is usually a big issue for me. I was intrigued by their abilities, but never really felt that they were fully developed characters.  They also somehow weren’t as interesting to me as, say, Tsukiko. I wondered quite often how Marco and Celia really felt about their abilities and the competition itself, and also wondered why they put up with the treatment they received while they were younger from Alexander and Hector (e.g. Marco was isolated for years, with no human interaction except for lessons with Alexander). I was often frustrated with their acceptance of the explanations (or lack thereof) that they received from their teachers.

This whole idea of a deadly competition that they were forced to participate in, but without any real explanation of the rules, just fell flat for me in the end. Since I never felt connected to the  characters, I was not very invested in the the competition and the outcome. I couldn’t imagine that the author would kill off either Celia or Marco, so when the ending came, it felt much less exciting or emotional than I think it was meant to be. In all honesty, I was somewhat confused by the ending, and had to reread certain passages to try and make sense of what had happened.

I truly did like many things about this book. Overall, though, I came away feeling that it was more style than substance. However, if this book appeals to you, I still recommend it, because Morgenstern’s writing really did create a vivid world for me that I liked reading about, even if I couldn’t quite connect with the characters inhabiting that world.