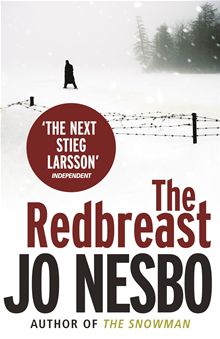 The Redbreast By Jo Nesbo

Published by Vintage on November 2, 2006

A report of a rare and unusual gun - a type favoured by assassins - being smuggled into the country sparks Detective Harry Hole's interest. Then a former WW2 Nazi sympathiser is found with his throat cut. Next, Harry's former partner is murdered. Why had she been trying to reach Harry on the night she was killed?

As Harry's investigation unfolds, it becomes clear that the killer is hell-bent on serving his own justice. And while the link between the cases remains a mystery, one thing is certain: he must be stopped.

This book was originally published in Norwegian, but I obviously read the English translation.

I recently watched the Danish tv show, Forbrydelsen, with English subtitles (remade in North America as The Killing). It was a fabulous mystery, and once it was over, I had the urge to read a Scandinavian mystery novel.

This is the third in a series of novels by Nesbo featuring the character Harry Hole (I believe there are eight in total). The two books that precede this are not yet available in English (if they had been, I definitely would have begun with the first book in the series).

The story jumps back and forth between present day Norway and the Norwegian Front in 1944, led by the Nazis. The alternating time lines were seemingly unrelated for the first part of the novel, and even though I realized that they would be connected at some point, I was a little confused initially.

I was also confused about Norway’s role in World War II because I didn’t know that Norwegians (and presumably others) had fought on the German side. Having some knowledge in that area probably would have made things less confusing at the beginning, but as the story progressed, I kept up and didn’t feel as though I was missing any key information in order to understand the story. Nesbo did a good job of laying out the historical foundation so that someone like me could follow fairly easily.

We are introduced to Harry Hole, a curmudgeonly detective, as he thwarts an attempt on the life of the visiting US President (Bill Clinton – the present day aspect setting is the year 2000) – or so Harry believes. He mistakes a US Secret Service agent for an assasin and shoots him. Through a series of diplomatic discussions, it is decided that the best thing for all involved is to keep the incident hushed up and promote Harry.

Now an Inspector, Hole investigates the purchase of a very unique, expensive rifle. The investigation involves Neo Nazis, the death of Hole’s former partner, a romance with a colleague, and takes him to South Africa, Vienna, and (briefly) Sweden.

I liked this book. It took me a little time to get into it, but the story was well done and I liked Harry. He was cranky, but he was also kind to his sister, who has Down’s Syndrome, and cared very much for his former partner, Ellen. These relationships showed that despite his general cynical attitude, he cared for those closest to him.

The novel ties together several seemingly-separate plot lines involving Norwegian WWII soldiers, the romance between a soldier and his nurse, and Hole’s investigation into the rifle. It’s very well done and the end left a couple of aspects unresolved, which is okay because I know there are a few more novels featuring Hole and I assume that things will be revealed and resolved over the course of the other books.

If you’re looking for a smart mystery, I recommend this. I definitely didn’t have anything figured out before the end but I enjoyed sitting back and reading about Harry solving it for me.