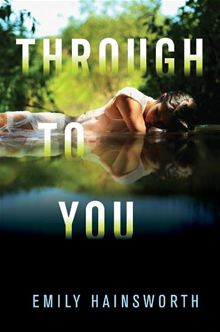 Through To You By Emily Hainsworth

Camden Pike has been grief-stricken since his girlfriend, Viv, died. He’d give anything to have just one more glimpse of her. But when Cam visits the site of Viv’s deadly car accident, he sees an apparition. Her name is Nina, and she’s a girl from a parallel world. When Cam follows her there and makes an unbelievable discovery, it’s as if all his wildest dreams have come true. But things are very different in this other world. Nina is hiding a secret, and the window between the worlds is shrinking every day. As Cam comes to terms with the truth, he’s forced to make a choice that will change his life forever.

I picked this up at the library after reading some online reviews. I love stories about parallel worlds, and that’s what this seemed to be. As the summary above says, Cam is trying to get over the death of his girlfriend, Viv. One night while he visits the scene of the car accident, he encounters a girl who seems to know who he is, although he’s never seen her before.

Her name is Nina, and she shows him how she has traveled from her world to his. When he goes to see where she came from, he is surprised that everything is mostly the same but different in key aspects. I won’t spoil the rest of the plot, but it was a really good story and a quick read, as I didn’t want to put the book down once I got into it.

Cam was a sympathetic character. He’d suffered a terrible injury, his parents had split up, and he lost Viv, the person he saw as the only real friend he had left after losing the ability to play football. In a show of support, Viv had even given up cheerleading, and they decided that as long as they had each other, they didn’t need anyone else. Given that, I could certainly understand why he’d want to visit Nina’s world, where Viv is alive.

What I really liked about this story was that somehow, the other world where Nina and Viv lived was menacing, even without much happening. There was an atmosphere that the author created that really worked for me and made me feel that something bad was going to happen. Parallel world stories always include a warning about the dangers of traveling to them, and I love that. What would happen if someone saw Cam in Nina’s world, or if someone saw Nina in Cam’s world? I liked the way this was explored, and the differences between each world were interesting.

A major part of this book is Cam’s examination of his relationship with Viv. Since she’s dead in his world, everything that we learn about her comes from what Cam shows us, through flashbacks and memories. It was interesting to see how he reacted to the Viv in Nina’s world, who seems at first to be just like ‘his’ Viv, but as the story went on, it was clear that she wasn’t the same person as the girl Cam lost and mourned. It was also interesting to see how Cam was different in the parallel world, and how ‘our’ Cam reacted to the ‘other’ Cam’s life.

I really liked this book, and I definitely recommend it if you like sci-fi and YA fiction!