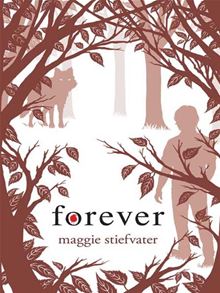 Series: The Wolves of Mercy Falls #3

then.
When Sam met Grace, he was a wolf and she was a girl. Eventually he found a way to become a boy, and their loved moved from curious distance to the intense closeness of shared lives.

now.
That should have been the end of their story. But Grace was not meant to stay human. Now she is the wolf. And the wolves of Mercy Falls are about to be killed in one final, spectacular hunt.

forever.
Sam would do anything for Grace. But can one boy and one love really change a hostile, predatory world? The past, the present, and the future are about to collide in one pure moment--a moment of death or life, farewell or forever.

I just finished reading Linger, the second in this trilogy (the first is Shiver), and was a bit on the fence about it. I was hoping for more from this, the final book in the series.

I don’t think I’ve mentioned it before, but I really love the cover art for each of these books.

Well, I was hoping for more from this book than I got out of Linger, and I got it, for the most part. I was much more interested in the events of this story. Grace shifted at the end of Linger, and Sam has been waiting for her to return. Meanwhile, her parents, the police, and most of Mercy Falls suspect Sam’s involvement in her unsolved disappearance, and combined with the fact that her friend Olivia has already gone missing and later turns up dead, things are not looking good for Sam.

Cole is still working on a cure for the shifting, and this search has given him some purpose (which in turn makes him a much more useful and interesting character). Isabel’s (I think I spelled her name wrong in my post on Linger) father has gotten more serious about hunting down the wolves that he believes are responsible for the death of his son, Jack, and his plans are a serious threat to Sam, Grace, Cole, and the pack.

As in Linger, this novel is alternately narrated by Sam, Grace, Cole, and Isabel, and has a prologue narrated by Shelby. I really do like the alternating POV narrations used throughout the series.

There is a plan put in motion to try and move the wolves before Isabel’s father can begin his hunt, which lends the book some urgency that was much needed in Linger. There is also an attempt to resolve Grace’s issues with her parents, and considering she is 17 years old and soon to be a legal adult, I thought it was as realistic as it could be while still remaining true to the characters and story.

If I had a complaint, it would be that I was hoping for a lot more from the scene with Beck, Cole, Sam, and Grace. I thought there was potential to address so many things that the author ultimately left untouched, althought it did provide the information necessary to move the plot along re: the idea to move the wolf pack.

Overall, I liked this book much better than Linger (although I would rate Shiver as the best book in the series). I also didn’t really mind its ambiguous ending – the way I look at it,  Grace and Sam now have their entire lives before them. They have futures full of their own choices, which took a lot of getting used to for Sam, and I saw the ending to this book as a reflection of that.

If you like YA books, this is definitely a series that I recommend.