Published by Harper Collins on December 22, 2009

Cover image and synopsis from Kobo:

Judas Coyne is a collector of the macabre: a cookbook for cannibals . . . a used hangman's noose . . . a snuff film. An aging death-metal rock god, his taste for the unnatural is as widely known to his legions of fans as the notorious excesses of his youth. But nothing he possesses is as unlikely or as dreadful as his latest discovery, an item for sale on the Internet, a thing so terribly strange, Jude can't help but reach for his wallet.

I will "sell" my stepfather's ghost to the highest bidder. . . .

For a thousand dollars, Jude will become the proud owner of a dead man's suit, said to be haunted by a restless spirit. He isn't afraid. He has spent a lifetime coping with ghosts—of an abusive father, of the lovers he callously abandoned, of the bandmates he betrayed. What's one more?

But what UPS delivers to his door in a black heart-shaped box is no imaginary or metaphorical ghost, no benign conversation piece. It's the real thing.

And suddenly the suit's previous owner is everywhere: behind the bedroom door . . . seated in Jude's restored vintage Mustang . . . standing outside his window . . . staring out from his widescreen TV. Waiting—with a gleaming razor blade on a chain dangling from one bony hand. . . .

A multiple-award winner for his short fiction, author Joe Hill immediately vaults into the top echelon of dark fantasists with a blood-chilling roller-coaster ride of a novel, a masterwork brimming with relentless thrills and acid terror.

I had the house to myself one weekend and for whatever reason, I decided that that was the perfect time to read a scary book. I decided to pick up Heart-Shaped Box by Joe Hill, which I’d owned for a while. I haven’t read anything else by him, but I know people who really like his books so I figured the time was right. 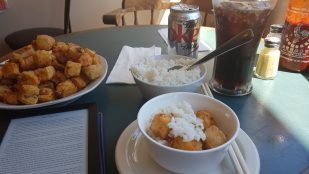 I read the first 15% or so on my e-reader while I was out having a solo lunch at one of my favourite restaurants. And I’m so happy that I wasn’t home alone while reading it because, even though the rest of the book wasn’t all that frightening (to me), that first part of the book had some of the creepiest moments I have read. And I would have hated to be home alone reading those first few chapters.  Believe me, if you know me or have read this blog for a while, you’ve probably heard me say that I don’t really get scared (other than by bugs and thunderstorms), particularly by books. As much as I love a spooky or creepy book, the majority of the ones that I read don’t frighten me in such a way that they stay with me once I put the book down.  I love when a book creeps me out while I read it, but for the most part, when I finish a book or put it down, I don’t continue to be scared or frightened. And while that turned out to be the case with this book, I must admit that the first few chapters (and one small scene further on) scared me! (I will elaborate in a more spoiler-y way towards the end of the review – trying to keep it spoiler-free here)

So initially I was very creeped out and very interested in what was going on in this story. But once I reached a certain point (to do with who the ghost was and what it was up to), it lost a lot of its power over me. I wasn’t scared or creeped out as I had been at first. This turned out to be a story about a ghost haunting a guy for a specific reason, and while it was definitely interesting, I was able to read the rest of the book in a way that left me feeling more detached and not frightened. I was just reading about some things happening to a guy. But in those first few chapters, I was reading about some very creepy and spooky things happening to this guy and I was so spooked that it felt like those things were happening to me, if that makes sense. I was fully invested and frightened in those early chapters.

I ended up reading the whole book in one day. It was definitely a book that I didn’t want to put down! I wanted to know what was going to happen next, how it was going to end, etc. and I wanted to keep reading. I think the story propelled the book for me, rather than any interest in or investment in the characters. If you’re looking for a scary read, I do recommend this one; even though I didn’t love it, and I thought the last part of the book was nowhere near as good as the first part, it kept me reading.

Read on for more spoiler-y thoughts:

The creepiest parts of this book for me were the parts that occurred before I knew who the ghost was and why he was haunting Judas. Specifically, the first encounters, where the ghost is sitting in the chair in the hall and Judas has this sense that he should not look at the ghost, really frightened me. Those were the parts that I was so happy I read while I was out in the sun at a restaurant and not in my home alone! And the scene where Judas speaks with his assistant, who is sitting in his vehicle but not going anywhere, creeped me out too, particularly where Judas’s assistant says something along the lines of how he had looked right at the ghost and that he wished he had not done that.

Also, all of that stuff that Joe Hill did with the voice on the radio and the email that was sent to Judas was great. Definitely scary and again, took place early on in the book before I knew what was going on, which (for me) was part of what made it so creepy.

The other part of the book that really gave me the chills came later, while Judas was checking his voice mails. That message he listened to from one of his dead bandmates was definitely creepy, especially the part where he holds the phone up for Judas to hear the noise around him. It was basically a phone call from Hell.

This book was uneven for me, but it interested me enough to want to check out more of Joe Hill’s books!