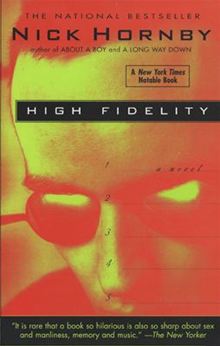 Do you know your desert-island, all-time, top five most memorable split-ups?

Rob does. He keeps a list, in fact. But Laura isn't on it - even though she's just become his latest ex. He's got his life back, you see. He can just do what he wants when he wants: like listen to whatever music he likes, look up the girls that are on his list, and generally behaves as if Laura never mattered. But Rob finds he can't move on. He's stuck in a really deep groove - and it's called Laura. Soon, he's asking himself some big questions: about love, about life - and about why we choose to share ours with the people we do.

This book was recommended to me by Mr. Pingwing following my review of Charlotte Street, so I finally got my hands on a copy from the library.

I must admit that I’ve seen the movie that this book is based on a couple of times, so I definitely knew the story and major plot points before I read the book. It seems that the film adaptation stayed fairly true to the book (yes I know the film takes place in America and the book is set in England), so when I was reading about Rob and Barry, for example, I couldn’t help picturing John Cusack and Jack Black (although I did try to imagine them with British accents).

I really liked this book. Although I knew what was going to happen, I really enjoyed this. Rob is in his mid-thirties, running a record shop that is, to put it nicely, not successful. He has two employees, Barry and Dick, who share his love and almost encyclopedic knowledge of music. He lives with his girlfriend, Laura…until she leaves him one day.

Not only has Laura left Rob, but it turns out she’s left him for another man. Rob’s way of dealing with the break up seems to involve, alternately, trying not to think about Laura, thinking about Laura, hanging out with one of Laura’s friends, calling Laura non-stop and semi-stalking her, crushing on an American singer, and examining his top five break ups of all time, then trying to get in touch with each girl from that list in an attempt to see what went wrong, etc.

Part of what I loved about this book was Rob’s tendency to make lists. Top five breakups, top five Elvis Costello Songs, etc. It was particularly entertaining when he was making these lists with Dick and Barry, as they couldn’t quite seem to agree on the top five anything. Rob’s obsessive music knowledge was fascinating, because I think we all know someone like that, and also because I think we all are a little bit like that (not about music, necessarily).

Quite often, I thought Rob was selfish, childish, and that Laura was likely better off without him. There were moments in the novel where he seemed on the verge of some sort of epiphany, but then he would shy away. At first I thought perhaps he lacked self-awareness but then realized at times he was mean, but knew he was being mean. Ultimately, though, he was afraid, and when he began to admit that and examine it, I began to like him more. I think the conversation he and Laura had in the car towards the end of the book was great because it seemed as though they both had a lot to say to each other that perhaps they hadn’t said before, and Rob seemed as though he was beginning to be honest about things like his feelings and fears, rather than shying away from ‘going there’. I loved that Laura called Rob out on a lot of his crap, while at the same time admitting that she hadn’t quite figured out everything for herself. My favourite line might have been when she told Rob that she had a life outside of him and their relationship – “I’m simply pointing out that what happens to us isn’t the whole story. That I continue to exist even when we’re not together.” (pg. 268 – okay, I guess that’s two lines).

While there was no big dramatic ending to this book, I appreciated its quiet resolution. It felt true to the rest of the book, and I think it was somewhat optimistic.

As a girl, this was definitely an interesting look into the male brain! While I couldn’t identify with a lot of what was going on here, I thought it was funny, a refreshing change of pace from my recent reads, and can see why it’s one of Mr. Pingwing’s favourites.  Even if you’ve seen the movie, if you haven’t read this book, I definitely recommend it.