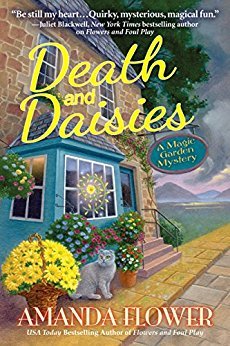 Death and Daisies By Amanda Flower

Synopsis and cover image from Goodreads:

Fiona Knox thought she was pulling her life back together when she inherited her godfather’s cottage in Duncreigan, Scotland—complete with a magical walled garden. But the erstwhile Tennessee flower shop owner promptly found herself puddle boot-deep in danger when she found a dead body among the glimmering blossoms. One police investigation later (made a trifle less unpleasant by the presence of handsome Chief Inspector Neil Craig), and Fiona’s life is getting back on a steady, though bewitched, track. Her sister Isla has just moved in with her, and the grand opening of her new spellbound venture, the Climbing Rose Flower Shop in Aberdeenshire, is imminent.

But dark, ensorcelled clouds are gathering to douse Fiona’s newly sunny outlook. First, imperious parish minister Quaid MacCullen makes it undeniably clear that he would be happy to send Fiona back to Tennessee. Then, a horrific lightning storm, rife with terribly omen, threatens to tear apart the elderly cottage and sends Fi and Isla cowering under their beds. The storm passes, but then, Fi is called away from the Climbing Rose’s opening soiree when Kipling, the tiny village’s weak-kneed volunteer police chief, finds a dead body on the beach.

The body proves difficult to identify, but Kipling is certain it’s that of the parish minister. Which makes Fiona, MacCullen’s new nemesis, a suspect. And what’s worse, Isla has seemed bewitched as of late…did she do something unspeakable to protect her sister? The last thing Fiona wanted to do was play detective again. But now, the rosy future she’d envisioned is going to seed, and if she and Craig can’t clear her name, her idyllic life will wilt away in Death and Daisies, national bestselling author Amanda Flower’s second enchanting Magic Garden mystery.

I will say right off the bat I was pumped to start this book! As soon as I finished Flowers and Foul Play (the first in the series) I started reading this next book. I will say that I was not disappointed, and that there were some parts of this book that were better than the first.

This series follows Fiona, an American from Nashville who moves to Scotland after her godfather passes away and leaves his cottage to her. Along with the cottage, Fiona is in charge of taking care of a magical garden on her new property.

In this second book Fiona is starting to settle into her life in Duncreigan. She is starting her own floral business and has her sister staying with her for an extended visit. However, during their opening party the local volunteer police chief announces he has found a body! And it’s the body of the local parish minister, who made it very clear that he wanted nothing to do with Fiona or her magical garden. Feeling as if she will become the primes suspect, Fiona decides to begin investigating the murder herself though this runs into conflict with Chief Inspector Neil Craig, her new love interest.

As I said with the previous book, I really enjoy this series more than I thought I would. The series is set in a beautiful setting (who doesn’t dream of escaping to the Scottish countryside?) and Fiona is a very likeable character. I am enjoying her journey of trying to fit in with her local neighbours, who are not always happy to welcome newcomers, and starting her own business even though her floral shop in Nashville had to close when a large flower chain opened up across the street.

I enjoyed the mystery in this book — it brought out some church politics, which intrigued me, and I like that the author showed the depth to the murdered character. Even though he was a villain in many ways, as Fiona investigated the murder further she got to hear stories from other church goers about how the parish minister helped a lot of those in need.

As with the last book I really like the romance between Fiona and Neil. They seem to be taking things slow, but they both treat each other with kindness, even when Fiona gets in trouble in her investigations.

I think the only part of the book that irked me was Fiona’s younger sister, Isla. Fiona is so organized and generous, and Isla constantly takes advantage of her, is self-absorbed, whiny, and petulant, and is very manipulative whenever Fiona tries to confront her. It’s hard to imagine why Fiona is so nice to her (although, as I write this I wonder if my older sisters would accuse me of doing some of the same things. I hope not!). I always like seeing sibling relationships in my cozies, but I just wish that Isla was more likeable.

Overall, I would highly recommend this series and book to anyone who wants to daydream about escaping the city and moving to the Scottish countryside. Bonus marks if you have an interest in gardening or flowers.