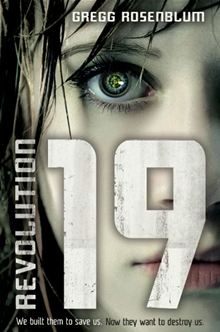 Twenty years ago, the robots designed to fight our wars abandoned the battlefields. Then they turned their weapons on us.

Headstrong seventeen-year-old Nick has spent his whole life in a community in the wilderness, hiding out from the robots that have enslaved mankind. But when the bots discover the community's location, he, his tech-geek younger brother, Kevin, and adopted sister, Cass, barely make it out alive—only to discover that their home has been destroyed and everyone they love is missing.

All survivors were captured and taken to one of the robots' Cities. The siblings have been hearing tales about the Cities all their lives—humans are treated like animals, living in outdoor pens and forced to build new bots until they drop dead from exhaustion. Determined to find out if their parents are among the survivors, Nick, Kevin, and Cass venture into the heart of the City, but it is nothing like they've been told.

As they live among the bots for the first time, they realize they're fighting for more than just their family. The robots have ruled for too long, and now it's time for a revolution.

This isn’t the first book I’ve read about a robot apocalypse (Robopocalypse), but I love that idea, so I was really looking forward to picking this up from the library.

This was a surprisingly quick read, and I finished the book in a day. The story doesn’t wait too long to get into the action, and quickly establishes the three main characters: oldest brother Nick, adopted sister Cass, and youngest brother Kevin.

While I appreciated that the story moved pretty quickly – the kids’ community is attacked by robots, killing many and capturing the rest, within the first few chapters –  I think I would have liked more time establishing the way they all lived in the wilderness, the different members of the community, etc. It might have helped me care a bit more that people died when the robots attacked. The siblings decide to venture into the City, thinking their parents must have been taken there for what’s known as re-education (brainwashing by the robots to turn resistant humans into ‘good’, compliant citizens).

I also came away wanting more background, more world-building. It felt a little bare-bones to me. I also wish I could have learned more about the robot uprising that so changed society. What I did get came in snippets, but I really wanted more background.

I did like the scene where the three siblings made it into the City and saw how different life was. I wish there had been more of that, too. Comparing their life out in the wilderness, as ‘freemen’, compared to the lives of those living in the City as ‘citizens’, could have been explored a bit more, and it would have given me more of the world-building I was after. I didn’t feel that the characters were very developed, and therefore didn’t find myself all that attached to them or concerned about them.

The re-education scenes were some of my favourite parts of the book, because I was so curious as to how, in a short 20-year time frame, life had changed so much and people were so seemingly-accepting of robots taking control of everything. Re-education was like a combination of brainwashing and torture, but it shed some light on the robots’ motives: they took over to save humanity from itself, basically.

I wish this story had been a stand-alone, because everything these days seems to be part of a series, and because I really do think the story could have been told in one book, and I don’t know if I liked this book enough to read another entry. Based on the ending, it seems like there is at least a sequel in the works.

If you don’t think about it too hard, and if you like sci-fi and YA, this book may be for you.