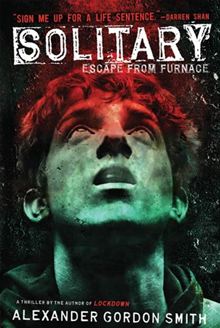 Furnace Prison ...
Where death is the least of your worries.
Escape is just the beginning ...

We thought we’d made it, we thought we were free. But we should have known there was no way out of Furnace.

All we did was slip deeper into the guts of the prison: into solitary confinement, where the real nightmares live - the warden, the Wheezers, and something much, much worse.

The clock’s ticking. Because if we don’t escape soon they will turn us into freaks - like them. For ever.

In the darkness of the hole your worst nightmares come to life.

I read and enjoyed the first book in this series, and was looking forward to reading this. Here is the Kobo store’s summary:

Alex Sawyer and his mates should have known there was no way out of Furnace Penitentiary. Their escape attempt only lands them deeper in the guts of this prison for young offenders, and then into solitary confinement. And that’s where a whole new struggle begins—a struggle not to let the hellish conditions overwhelm them. Because before another escape attempt is even possible, they must first survive the nightmare that now haunts their endless nights.

At the end of Lockdown, Alex and some of the other boys serving sentences in Furnace had devised an escape plan. This book picks up right where the first left off, with the boys attempting to break free from Furnace Penitentiary and its evil warden.

Although some of them were successful in initially getting out, they wind up trapped deeper in the Furnace, and are eventually captured by the warden.

Alex and Zee wind up in solitary confinement, and although he never would have believed it possible, Alex finds himself missing the relative safety and comfort of his old cell in the general population. ‘The hole’ is a miserable place, and as Alex is sinking deeper and deeper into despair, he receives a visit from a boy named Simon, who lives in the recesses of Furnace, and who wants Alex to help him get out for good. Simon comes back several more times to see Alex and Zee, breaking them out of solitary to explore, but always sending them back so that the warden believes they are still locked up.

The three of them devise a plan, waiting for the right time to put it into action. They also encounter Donovan, Alex’s old roommate, who has undergone the terrifying procedure that the warden uses to turn the prisoners into Blacksuits, the evil Furnace guards. Alex promises Donovan that they will come back for him when they make their escape.

In addition to the warden’s Blacksuits, Weezers, and Dogs who will hunt Alex and his friends down if the warden knows what they’re up to, Alex discovers that there is another enemy to avoid: Rats. The Rats are boys who didn’t take to the procedure involved in making them Blacksuits, and who live somewhere in Furnace, feeding on whatever (and whoever) they can to survive.

Eventually, the time comes for them to try to break out of Furnace, again. I won’t tell you how it ends, though!

Like the previous book, this one is pretty action-packed, which I liked. I also liked that the author does not shy away from killing off certain characters – although I was sad, I also think it emphasizes the dangers of Alex’s situation. I also have to admit that I didn’t anticipate that the author would go there, but I appreciate that he did.

This book is darker and move violent than the young adult books I usually read, but I enjoyed this book so much that I read the next book in the series as soon as I finished this one!

If you like your YA books a bit darker, I definitely recommend this series.