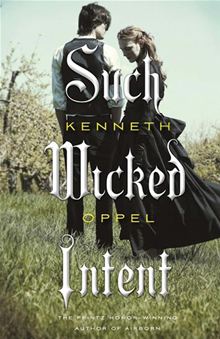 Such Wicked Intent By Kenneth Oppel

Series: The Apprenticeship of Victor Frankenstein #2

Published by HarperCollins on August 20, 2012

When does obsession become madness? Tragedy has forced sixteen-year-old Victor Frankenstein to swear off alchemy forever. He burns the Dark Library. He vows he will never dabble in the dark sciences again, just as he vows he will no longer covet Elizabeth, his brother's betrothed. If only these things were not so tempting. When he and Elizabeth discover a portal into the spirit world, they cannot resist. Together with Victor's twin, Konrad, and their friend Henry, the four venture into a place of infinite possibilities where power and passion reign. But as they search for the knowledge to raise the dead, they unknowingly unlock a darkness from which they may never return.

Be warned – there may be spoilers for the first book in this series, This Dark Endeavour.

I absolutely loved This Dark Endeavour, and was really excited to read this sequel. It had all the things I loved about the first book: jealousy, rivalry, historical setting, adventure, and a plot that had me hooked right away.

Victor and his family are still grieving Konrad’s death, with Victor reflecting on his efforts to save Konrad with the Elixir of Life. One day, while standing outside watching the books from the Dark Library being burned on his father’s orders, Victor notices a book that does not burn. He sneaks it out of the pile of books, and it turns out to be not a book but a container shaped like a book, which holds items that fascinate Victor.

The items that Victor discovers lead him, Elizabeth, and their friend Henry on a search of the Frankenstein home, and they uncover a secret room where they learn how to cross over into the spirit world. Victor wants to find Konrad and bring him back, but Elizabeth and Henry are more cautious.

I loved the way the spirit world was portrayed in this novel. When Victor, Elizabeth, and Henry ventured over, their spirits remained in the Frankenstein home but there were no people there (only spirits, like Konrad). They could see the house in all of its different incarnations over time, noticing walls where they no longer stood, pieces of furniture and art that they didn’t recognize. I loved that idea.

There was also something wrong in the spirit world – the house was surrounded by a swirling, deep mist that seemed to want to enter the home. Konrad was fearful of something that seemed to reside deep inside the home, which could be heard rumbling at times. Elizabeth and Henry were concerned for Konrad, and I was too, to be honest. It made me so sad to think of him in that mostly empty manor, trapped inside, able to reunite for brief periods of time with his twin brother, best friend, and woman he loved, afraid and lonely.

Victor saw things differently: he discovered that the mysterious butterfly-type creatures that flutter around the home in the spirit world bestow something on the spirits of the living when they touch: Victor’s knowledge and intellect grow; Henry becomes more assertive and powerful; and Elizabeth, to Victor’s eyes, becomes more animalistic and alive. Victor quickly becomes obsessed with the butterflies and the abilities they provide him, going so far as to bring them back from the spirit world. His thirst for knowledge threatened to overtake him and endangered those around him.

Victor vows to Konrad that he will discover a way to bring him back from the spirit world, and for a time, it seems that he has: he, Elizabeth, and Henry have a plan to create a new body for Konrad’s spirit to inhabit. However, as the plan takes shape, Victor finds himself suspicious of the creature that they create for Konrad’s spirit, almost fearful of it. Elizabeth and Henry, though, see nothing sinister and instead dote on it, seeing it as Konrad already.

I loved the darker tone of this book, tackling the supernatural and dark arts, life after death, and seeing Victor’s ego grow and grow. Realizing that he has created a life fills him with such a sense of pride and power, and it will clearly not end well. Victor’s belief in science was shaken at the beginning of the book, following his adventures to create the Elixir of Life, and with the dark arts, he has found something else to believe in and whose knowledge to pursue – but how far is he willing to go?

Again, Victor finds himself torn between love and loyalty for Konrad, and his love for Elizabeth. However, as is pointed out in the story, I couldn’t help but wonder whether Victor did truly love Elizabeth, or whether he saw her as one more object to possess, something else to control.

As in the first book, I loved the characters. I really enjoyed seeing Henry assert himself more, no longer the meek boyhood friend who does not challenge Victor’s decisions. I also felt that I could sympathize with Victor: he really loved Konrad, and felt a sense of guilt and responsibility for what has happened to Konrad. However, while Victor wants to bring Konrad back, isn’t this as much about his own pride as it is for Konrad? Victor wants to be the hero, not only to bring Konrad back but for his parents, Elizabeth, Henry, and Konrad to all know that he did it.

I definitely recommend this book, and if you haven’t read This Dark Endeavour, you should start there and then pick this book up right after!