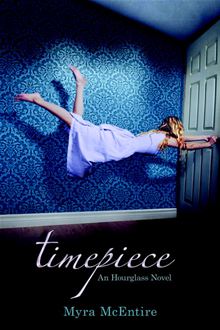 Kaleb Ballard was never supposed to be able to see ripples - cracks in time. Are his powers expanding, or is something very wrong? Before he can find out, Jonathan Landers, the man who tried to murder his father, reappears. Why is he back, and what, or whom, does he want?

In the wake of Landers' return, the Hourglass organization is given an ultimatum. Either they find Landers and the research he has stolen on the people who might carry the time gene, or time will be altered - with devastating results for the people Kaleb loves most.

Now Kaleb, Emerson, Michael, and the other Hourglass recruits have no choice but to use their unusual powers to find Landers. But where do they even start? And when? And even if they succeed, it may not be enough...

This is the sequel to Hourglass, which I read and enjoyed last year. I saw this on the shelf at the library and snatched it up!

I liked Kaleb in Hourglass, and was definitely intrigued when I learned that he was to be the narrator in this sequel. As much as I liked Emerson in Hourglass, though, I didn’t care for her much in this book. I know Kaleb has feelings for Emerson, but in this book, she came across as whiny and weak. I couldn’t help but roll my eyes every time she was described as tiny or small, and every time she was picked up and carried by Michael or whoever in this book irked me (was it more than once, or was it just that the one time really really really annoyed me? I can’t remember and I’ve returned the book to the library already). I know Emerson was mentally tough, and Kaleb kept describing her as tiny but strong, but I couldn’t help but feel like she was actually being described as physically weak, and that bothered me.

But Lily, Emerson’s best friend, was much more involved in this story, and I loved it. Lily was sarcastic, funny, and I loved her relationship with Kaleb. She practically hated him at first, but by the end of the book, they had developed such intense feelings for each other. I think they’re a good match, and it hopefully means the end of whatever love triangle had been going on with Emerson, Michael, and Kaleb. I also liked learning more about Lily’s past and her ability.

Despite my complaints above about Emerson’s depiction in this novel, I actually felt like she and Michael weren’t in this book enough. Michael felt like he was just background – it didn’t even feel like he was a character in this book. I thought I would learn a lot more about his relationship with Kaleb and that there would be more scenes between the two of them, but there weren’t, which disappointed me a bit.

Perhaps the biggest problem with this book was that I simply waited too long to read it after I read Hourglass, because I really struggled to remember the major plot aspects, and there wasn’t much recap in this book to refresh my memory. Of course, that’s my fault, not the book’s, but before I read the next book in the series, Infinityglass, which is out later this year, I’d better go over the major plot points again.

I really like the idea of these books, and I think I would have liked this book more if I had read it closer to the time I finished Hourglass. I love stories about time travel and despite Kaleb’s arrogance or cockiness, I liked him as a narrator. The plot in this book expands on that of Hourglass and I definitely got a sense of the danger that the characters were in because of Jack, and I’m looking forward to seeing how it all wraps up in Infinityglass. If you like time travel and YA, I recommend this series.