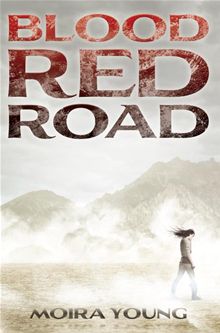 Saba has spent her whole life in Silverlake, a dried-up wasteland ravaged by constant sandstorms. The Wrecker civilization has long been destroyed, leaving only landfills for Saba and her family to scavenge from. That's fine by her, as long as her beloved twin brother Lugh is around. But when four cloaked horsemen capture Lugh, Saba's world is shattered, and she embarks on a quest to get him back.
Suddenly thrown into the lawless, ugly reality of the outside world, Saba discovers she is a fierce fighter, an unbeatable survivor, and a cunning opponent. Teamed up with a handsome daredevil named Jack and a gang of girl revolutionaries called the Free Hawks, Saba's unrelenting search for Lugh stages a showdown that will change the course of her own civilization.

This is a fairly new book that I’ve already heard a lot about, and was eager to read it.

I liked this book. It was really action-packed and had that whole ‘protagonist sets off on a quest to rescue someone and meets a group of helpful people along the way’ thing going on. It also appears to be the first in a series (as all young adult books seem to be these days) called Dustlands.

Saba lives with her father, twin brother Lugh, and younger sister Emmi, in some sort of post-apocalyptic world without technology. Saba has never forgiven Emmi for the fact that their mother died while delivering her. Their father has also refused to move away from their isolated hut, perhaps not wanting to leave behind the memories of Saba’s mother.One day a group of men on horseback appear and kidnap Lugh, killing their father in the process. Saba knows that she has to set off and rescue Lugh, and reluctantly brings Emmi with her. Along the way, they encounter a variety of people – some helpful, some not – and travel across harsh terrain.

I liked the general plot of this book. I like these post-apocolapytic stories. There was also a lot of good action, although I think the action sections of the story could have been a bit longer. They felt like they were over a bit too quickly for me.

I also liked the characters. Saba is tough, stubborn, and does not easily accept help from others. While this can make her a bit annoying at times, she will do anything for the people that are important to her. Emmi, while only nine when the book begins, is a brave fighter by the end, and along the way is eager to get involved and make a difference.

There are other characters that they meet who offer them help: Jack, for whom Saba develops romantic feelings (and who lightens the story a bit with much-needed humour); Maev, the leader of the Free Hawks (a group of girl warriors); and Ike, Jack’s gentle giant friend. These characters, among others, shed light on the reasons for Lugh’s kidnapping and where Saba must go if she hopes to rescue him.

The story moved along fairly quickly, but there are parts of the story that I would have liked to read more about and to which I wish the author had devoted a bit more time (e.g. Saba’s time in Hopetown and the hellwurm fight).

Also, there are no quotation marks used throughout the story, which really annoys me, because it makes it tricky at times to sort out the dialogue. I don’t know why the author chose to do that, and it doesn’t really affect the overall enjoyment of the story, but personally, I am annoyed by that sort of thing.

There were also times where the author would write that something had happened, but not describe it as it was happening, which I would have preferred. For example, during a battle scene, we read that at one time, Saba is fighting back to back with Jack – I would have preferred to read a description of the battle itself and how she and Jack wound up back to back – I guess I wanted more detail. Don’t just tell me that something happened – decscribe it to me as it happens (if that makes sense).

I like the world the author has created as well, with its dry, desolate landscapes and difficult terrain. There is not much in the way of technology, and onl a few seem to have the ability to read. I hope to read more about the world itself, and whatever happened to make the world the way it is, as the series progresses.

There certainly seems to be a trend towards post-apocalyptic, action-heavy stories in YA books lately (or perhaps the trend is only making its way to my reading list). I like it – these stories are fun to read! And of the ones I’ve read that come to mind (Hunger Games series, Maze Runner, Forest of Hands and Teeth series, Wither, etc.), they are all very different from each other, so if you don’t like one book in this genre, it doesn’t mean you won’t like others.

So despite the things I didn’t like about this book, I still recommend it. The story is good, there is a lot of action, and the characters are mostly likable (I say mostly because as much as I liked Saba, she was annoying at times, always pushing Jack away despite her feelings for him, and refusing help from other people when she clearly needed it).

I’m not sure what the next book will be about and when it will come out, but I’ll be looking for it to add to my TBR list.