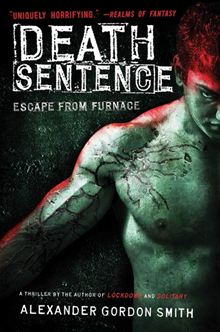 Alex's second attempt to break out of Furnace Penetentiary has failed. This time his punishment will be much worse than before. Because in the hidden, bloodstained laboratories beneath the prison, he will be made into a monster. As the warden pumps something evil into his veins--a sinisterly dark nectar--Alex becomes what he most fears . . . a superhuman minion of Furnace. How can he escape when the darkness is inside him? How can he lead the way to freedom if he is lost to himself?

This is the third book in the Escape From Furnace series, after Lockdown and Solitary. I read this one as soon as I finished reading Solitary.

Alex, Zee, and Simon tried to escape at the end of Solitary, but were captured by the warden and brought to the Infirmary, where the warden turns boys into Blacksuits.

The warden is furious that Alex was able to break free not once, but twice. Now the warden is going to have him turned into a Blacksuit, undergoing the mysterious surgical procedures that will turn him into a powerful creature of Furnace. Of course, there is also the risk that Alex won’t survive the procedure.

Throughout this book we get some of background information on the Furnace itself, the warden, and Alfred Furnace, the creator and seemingly the only person to whom the warden answers.

Alex is injected with a substance called nectar, which, along with the surgical and psychological procedures he undergoes, will turn him into a Blacksuit. He becomes stronger than he ever thought he could, and is filled with anger. He begins to see how weak he used to be and how weak the boys in the Furnace are, and loves the feeling of power he’s been given. He likes feeling that he belongs, finally, as the Blacksuits accept him as one of them.

However, there is a memory from his former life that he can’t shake – a boy from the beginning of this time in Furnace, telling him that whatever they do to him in Furnace, to hold on to his name, to remember who he is.

This book was so hard to put down! Alex’s struggle to hold on to his identity was very interesting and sad at the same time, because he is tested by the warden in some very cruel ways, before the warden finally realizes that Alex will not let himself become a servant of Furnace.

Once again, Alex is at odds with the warden and needs to come up with a plan to get out of the prison. I won’t tell you what happens next, but as with the other books in this series, Death Sentence is creepy, action-packed, and intense. The final two installments in the series will come out sometime in 2012 and I can’t wait to read them!