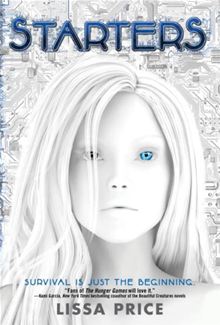 Published by Delacorte Books for Young Readers on March 13, 2012

Callie lost her parents when the Spore Wars wiped out everyone between the ages of twenty and sixty. She and her little brother, Tyler, go on the run, living as squatters with their friend Michael and fighting off renegades who would kill them for a cookie. Callie's only hope is Prime Destinations, a disturbing place in Beverly Hills run by a mysterious figure known as the Old Man.

He hires teens to rent their bodies to Enders—seniors who want to be young again. Callie, desperate for the money that will keep her, Tyler, and Michael alive, agrees to be a donor. But the neurochip they place in Callie's head malfunctions and she wakes up in the life of her renter, living in her mansion, driving her cars, and going out with a senator's grandson. It feels almost like a fairy tale, until Callie discovers that her renter intends to do more than party—and that Prime Destinations' plans are more evil than Callie could ever have imagined. . . .

I was drawn to this book because of a post I read recently on the Teen blog at the Indigo website, which recommended it to fans of dystopian fiction in general and The Hunger Games in particular.  A positive comparison to The Hunger Games was enough to get me interested in reading this one!

I really like the premise of this story: something called The Spore War has wiped out everyone except the elderly and people under 20 – they were the most vulnerable and so were vaccinated first (although it is hinted at that some “VIP” ‘middles’ received the vaccine as well). In this new reality, the elderly, aka Enders, rent the bodies of teens, aka Starters, and enjoy being young again. Because many Starters have no living parents or grandparents, and because they are not permitted to work in order to prevent Enders from being pushed out of the work force, they live in extreme poverty, hiding out in abandoned buildings from the Marshalls – Enders who would turn them in to the authorities and institutions.

This poverty is what drives many Starters to rent out their bodies to Prime Destinations, the facility that sets up Enders in their renters’ bodies. They are promised a makeover and more money than they could dream of, if they sign up for three rentals.

This is the situation in which Callie, our protagonist, finds herself. She lives with her younger brother, Tyler, and their friend, Michael. It seems that Tyler is frail or sickly, and Callie decides to become a renter in order to have enough money to buy a place where they can live, to put an end to having to constantly move around and hide from Marshalls.

Of course, things don’t quite go as planned, and Callie discovers a plot involving Prime Destinations that she is determined to stop (saying anymore might spoil some of the plot twists – and the author sure smushes a lot of them into this book!). There is also a romantic subplot involving a boy named Blake which made me roll my eyes at first, but by the end of the book, I had come to like that aspect of the novel.

I thought the book started out well. The setting and plot were set up nicely, and I liked Callie, Tyler, and Michael. However, the middle of the book felt a bit off to me. I felt that the author was trying to go in so many different directions that it felt muddled and confusing, and it lacked focus. Thankfully, the final few chapters did a pretty decent job of bringing it back together and setting it all up for the next book in this two-part series, Enders.

As a protagonist, Callie is likeable. She is willing to do anything for the people that she loves, and she’s brave and tough. I found her a little gullible at times, but reminded myself that she’s 16 years old and has lost her parents, and is doing her best in an incredibly difficult situation to take care of the only family she has left.

I was hoping to learn more about the time before The Spore Wars and get some more of that backstory, but no luck. Of course, there is now a prequel short story available, Portrait of a Starter, which I guess I’ll have to read if I’m looking for some of that backstory.

I’ve read and enjoyed a lot of dystopian YA fiction lately. The Hunger Games series has been my favourite so far, but other good ones include Divergent, Wither, Matched, Blood Red Road, Lockdown and the rest of the Escape From Furnace series, and The Forest of Hands and Teeth series.

I would add this book to that list of enjoyable YA dystopian fiction, but let’s be honest, this is not ‘another Hunger Games‘.  That kind of comparison might draw a lot of readers (myself included) to this book, but if people are really hoping to find another Katniss/Peeta/Haymitch, etc., they’ll come away disappointed – which is a shame, because on its own, this is a fairly interesting, thought-provoking book, examining the disparity between the wealthy and the poor. It also showcases the opposing powers of the young and the old in Callie’s society: the Enders all want to be young again so that they can live it up and enjoy young, healthy bodies, but the true youths are powerless, because only the elderly can work, earn money, and own property.

I liked this book enough that I’ll recommend reading it, although I’m hoping for more answers and a stronger focus from the next installment, Enders.