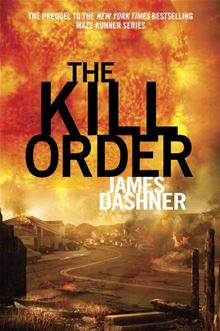 The Kill Order By James Dashner

Published by Delacorte Books for Young Readers on August 14, 2012

Before WICKED was formed, before the Glade was built, before Thomas entered the Maze, sun flares hit the earth and mankind fell to disease.

Mark and Trina were there when it happened, and they survived. But surviving the sun flares was easy compared to what came next. Now a disease of rage and lunacy races across the eastern United States, and there’s something suspicious about its origin. Worse yet, it’s mutating, and all evidence suggests that it will bring humanity to its knees.

Mark and Trina are convinced there’s a way to save those left living from descending into madness. And they’re determined to find it—if they can stay alive. Because in this new, devastated world, every life has a price. And to some, you’re worth more dead than alive.

I borrowed this from the library because it’s the prequel to the Maze Runner series, which I read and mostly enjoyed.

I read this book because I wanted to know more about the solar flares and virus that had ravaged the planet during Thomas’s time in the series’ time line.

This book follows Mark, a teenager, and his friend Trina. We encounter them right before the solar flares start, and with chapters that alternate between Mark’s present day and flashbacks to his and Trina’s survival during the early days of the disaster.

What I liked about this book was seeing how the flare virus affected people – it was really freaky, and reminded me of a part near the beginning of The Scorch Trials where Thomas encounters someone infected with the virus, which was similarly unsettling. I also liked the way the story was told, with the combination of flashbacks and present-day narration.

As for the characters, the only ones that I really felt that I knew well enough to remotely care about were Mark and Alec. Although the summary says that the book is about Mark and Trina, Mark actually spends the bulk of the story with Alec, looking for Trina and others from their group. Alec was capable, rational (well, maybe as rational as one can be in that situation), and tried to think first, then act. Mark, on the other hand, was young, impulsive, and constantly doing things that had me shaking my head. Granted, there seemed to be a major age difference between the two of them, but I was annoyed by Mark’s behaviour throughout the book.

Reading about these characters was somewhat bittersweet though, as I knew their fates even before I read the book (because I assumed they all died either during this book or between it and the events of The Maze Runner).

The story is entertaining enough, and I really liked the action scenes, but I just didn’t feel like I learned all that much about the flare virus itself, and I suppose I was dissatisfied for the explanation behind it.

I didn’t love this book but I was mildly entertained (moreso during the action scenes). If you have read the Maze Runner series, you may want to read this too, at least for the prologue and epilogue, which tie in with the rest of the series.