We had a big storm here on Friday and our power was out for about 24 hours. The storm was a little scary, but after it passed, it wasn’t so awful being without power. We had enough food, a gas barbecue to cook on and boil water for coffee, and I got a lot of reading done by candlelight. My phone battery got super low and I turned it off to save whatever power was left, but I really liked feeling disconnected from the online world, to be honest.

The worst part was not having hot water – I did not enjoy taking a cold shower, but it was manageable. We were told to expect to be without power for a few days, but we ended up getting it back on Saturday evening. Lots of people in the area are still without power though, so we are feeling pretty fortunate. 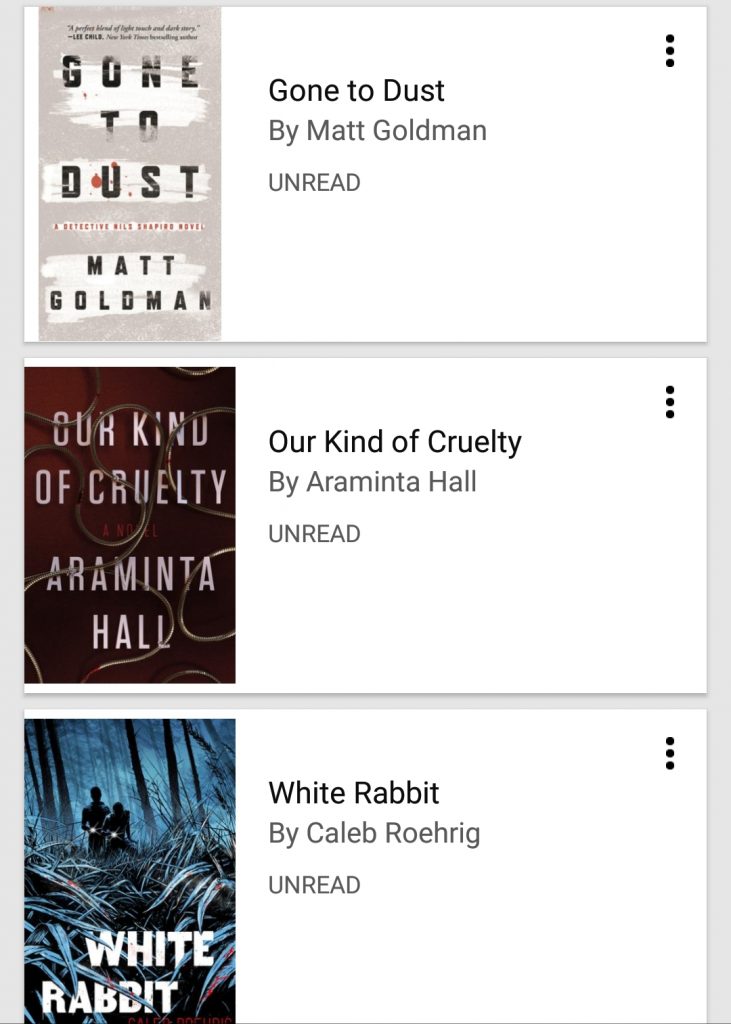 I bought three books for my Kobo, all of which were on sale for one day only for $2.99, and which had been on my TBR list for a while:

Our Kind of Cruelty, Araminta Hall; and

I finished three books this week:

Vicious, Victoria Schwab (this was a reread because the sequel, Vengeful, is at long last coming out on Tuesday! My preorder has already shipped, so I’m really hoping it arrives a day early because I cannot wait to read that book!);

The Clockmaker’s Daughter, Kate Morton; and

I ended up DNFing my audiobook attempt at Jenny Colgan’s Meet Me at the Cupcake Cafe. The book itself was fine, but I’ve learned that I just cannot do audiobooks. Unless it’s a book I’ve already read, I need to see the words on the page (or screen). I would try this as a physical book or ebook, but I couldn’t focus on it in audiobook format.

I read a couple of chapters of Merve Emre’s The Personality Brokers but haven’t picked it back up recently. I’m going to try a few more chapters today, and then I’ll try to decide on a fiction book to start too.

I posted my reviews of The Seven Deaths of Evelyn Hardcastle by Stuart Turton, and The Night Sister by Jennifer McMahon. I also posted my sister’s review of Skinny Dipping with Murder by Auralee Wallace in the cozy corner.

Time for a little more reading and then catching up on my Better Call Saul podcast. Happy Sunday!