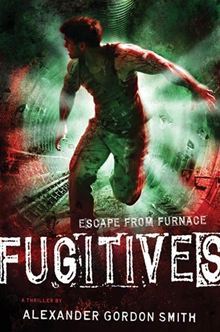 Forever altered by his experience in Furnace Penetentiary, Alex has done the impossible and escaped. But the battle for freedom is only just beginning. Charged with his superhuman abilities, Alex must uncover the last of Furnace's secrets—the truth about the man who built the prison, the man known as Alfred Furnace. And to do that he must stop running and finally confront his greatest fears.

This is the fourth book in the Lockdown series, following Lockdown, Solitary, and Death Sentence.

This is the second-last book in this series, so there are still a lot of unanswered questions, and I hope that things are resolved nicely this fall when the final book comes out!

Alex, Zee, Simon, and the rest of Furnace’s prisoners have escaped, and are now on the run from both the police and the warden’s Blacksuits. Eventually they discover that there are other creatures out there – bersekers – that have been released by Alfred Furnace himself. As they make their way through the city, they have to try to avoid the police, Furnace’s creations, and the other escaped inmates. Alex experiences strange auditory and visual hallucinations that are Alfred Furnace’s attempts to communicate and convince Alex to work with him, rather than fight him. These hallucinations increase as he, Zee, and Simon decide to track Furnace down and kill him, and as Alex must ingest more nectar (the substance that transforms people into Furnace’s monsters and allows him to control them).

They also encounter Lucy, a civilian, while they’re making their way through the city. At first, she’s reluctant to join them, deciding to do so only because it would be safer than staying on her own, but I think she came to like them eventually – there was even a bit of a spark between her and Zee, I thought. There are no female characters in these books (other than mentions of Alex’s mom in the beginning of the first book), so I was happy to finally have a girl show up.

The city goes into lockdown mode, and everywhere Alex and his friends go, they encounter danger. As with the other books in this series, this one is dark and violent. I love this series, and part of what I like about it is that I can’t predict anything that happens – the author is not afraid to get rid of characters that the reader cares about, or to put Alex in seemingly inescapable situations. That said, I have no idea how the events of this series can be resolved in the next and final installment, but I am trying to prepare myself for a sad ending.

I like the character of Alex – he has gone from a young, scared boy to one of the Furnace and the warden’s monsters, and is trying to hold on to his humanity. Despite the fact that he was framed for the murder that landed him in Furnace Penitentiary, he does not see himself as innocent or even a good person. I think Alex needs some redemption, and needs to see that although he’s done some bad things in the past, he’s not a bad person. He has risked himself numerous times to save the lives of others, but we’ll see how things end.

Overall, another excellent installment in this series, and if you’ve read the first three books, you must read this one.